The North American market for all-electric presses continues to be promising. Hydraulic injection molding machines still account for about half the presses operating in North America, even though electric machines are dominant elsewhere in the world. Sumitomo (SHI) Demag Plastics Machinery took steady aim at accelerating North America’s conversion to all-electric technology, when it made the global introduction of its newest platform, the SEEV-A, at an open house at its technology center in Strongsville. 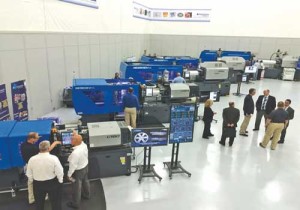 “But the SEEV-A platform will change that small-tonnage perception in North America, and around the world,” Martich said.

The event included technical presentations and five molding demonstrations on SEEV-A machines ranging from 56 to 562 tons of clamping force. The machines were selected to show off the versatility of the technology, with presses capable of micro-molding all the way up to shot sizes over 75 ounces, and for diverse applications including automotive, packaging, closures and medical. The SEEV-AHD presses range from 247 to 562 tons of clamping force, and the SEEV-A presses from 56 to 202 tons.

At the open house, the following presses were running:

• A SE385EV-AHD (433 U.S. tons) ran a two-cavity, hot-runner mold for 5-gallon snap-on bucket lids, on a 14.5-second cycle. Each of the linear low density polyethylene lids weighed 12.2 ounces. The demonstration highlighted double center press platen (DCPP) design, which ensures even distribution of surface pressure on both the moving and stationary sides of the mold.

• A SE180EV-A (202 U.S. tons) ran thin-wall, medical dosing cups on a sub 3-second cycle. The eight-cavity, hot-runner valve-gate mold was supplied by Caco Pacific with proprietary conformal cooling in the cores and cavities.

• A SE50EV-A (56 U.S. tons) ran an eight-cavity, cold-runner mold, on an 18-second cycle, molding two sizes of acrylic paper clips: one weighing 0.79 grams and the other size weighing 1.35 grams. The demonstration highlighted FFC system, which was switched on and off to show the effect on the parts in this unbalanced or “family” mold in which four of the parts are 70 percent bigger than the other four parts.

Martich said molders can expect a rapid return on investment with SEEV-A machines.

“They’re solutions that open up the benefits of all-electric machines,” he said.