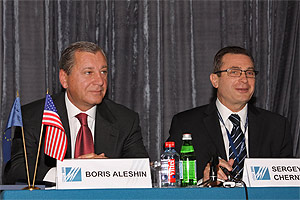 Moscow/Leverkusen – Under the banner “Chemistry – shaping the future”, specialty chemicals company LANXESS and the Russian Academy of Sciences are inviting around 400 guests to attend a joint scientific symposium in Moscow on November 8, 2012. The high profile conference with scientists from both countries, which is being organized as part of Germany Year in Russia 2012/2013, offers a wide range of themes from various chemical disciplines – from catalyst chemistry and polymer and organic chemistry to material science issues.

Among the many prominent speakers taking part in the symposium are Russian Nobel Prizewinner Academician Zhores Alferov, Vice-President of RAS; Professor Hans-Jörg Bullinger, President of the Fraunhofer Society in Munich; Academician Iliya Moiseev from the Kurnakov Institute of General and Inorganic Chemistry, Moscow; and Professor Joachim Sauer, Head of the Quantum Chemistry Research Group of Humboldt University in Berlin.

The symposium comes under the patronage of Dr. Georg Schütte, State Secretary in the German Federal Ministry for Education, Science, Research and Technology, and Igor Fedyukin, Deputy Minister of Education and Science of the Russian Federation.  Under the theme “Germany and Russia: shaping the future together”, Germany is mounting an information campaign throughout Russia from June of this year to June 2013 involving a broad range of projects in the areas of politics, business, culture, education and science.

The projects are sponsored by the German Foreign Ministry, the Goethe Institute and the Committee on Eastern European Economic Relations, with support from the German-Russian Chamber of Foreign Commerce (Deutsch-Russische Auslandshandelskammer).

Chemistry shaping the future
“The focus of this symposium is on chemical industry solutions representing the key means to resolve the global challenges of our time – such as increasing environmental impact and dwindling resources,” says Werner Breuers, member of the board of management of the LANXESS AG. In plenary lectures and specialized sessions, natural scientists will talk about chemical research and the possibilities it offers for overcoming global challenges.

“This meeting of leading chemists from both countries with their long scientific traditions is a logical continuation of activities designed to highlight the importance of the chemical industry and the contributions it makes to the development of human society,” says Sergey Aldoshin, Vice-President of the Russian Academy of Sciences. LANXESS has been working closely with the Russian Academy of Sciences since 2009 and has since established a research network with leading Russian institutes and universities.

LANXESS concert marked the start of Germany Year in Russia
On June 20, the LANXESS Young Euro Classic Concert Russia marked the official start of Germany Year in Russia 2012/2013. Initiated by LANXESS, the Young Euro Classic Orchestra performed at the Tchaikovsky Conservatory in Moscow for some 1,800 high-ranking guests from both countries, including German Minister of State Cornelia Pieper and Russian Minister of Culture Vladimir Medinsky. Comprising 76 highly talented music students from Berlin University of the Arts and the Moscow Tchaikovsky Conservatory, the orchestra had been established specifically for this kick-off event.

“The two events we are organizing during Germany Year in Russia 2012/2013 underline our ties to Russia,” says Werner Breuers, explaining LANXESS’ activities. “Russia and the CIS are key growth markets for us as part of our strategic focus on the BRICS countries.”

LANXESS in Russia
Since 2009, LANXESS has steered its business in Russia and other countries of the Commonwealth of Independent States (CIS) through its own sales subsidiary OOO LANXESS based in Moscow. Its target markets here include the automotive and tire industries, and the construction sector. Sales have tripled during this period. This is mainly due to the continued high demand for high-performance rubber products for tires and technical applications.

LANXESS is currently building its first production facility in Russia. From 2013, LANXESS subsidiary Rhein Chemie will produce rubber additives and release agents, primarily for the automotive and tire industries in Russia and the CIS, at its site in Lipezk. A production facility for bladders used in tire production is to be added in 2016. The total investment amounts to around EUR five million and 40 new jobs will be created at the new plant in the medium term.

Author plasticsinfomart 169
BARCELONA, Spain, October 30, 2012 – Merquinsa, a Lubrizol company, today announces that it will participate in the TPE 2012 conference, which will take...
Read More
Industry