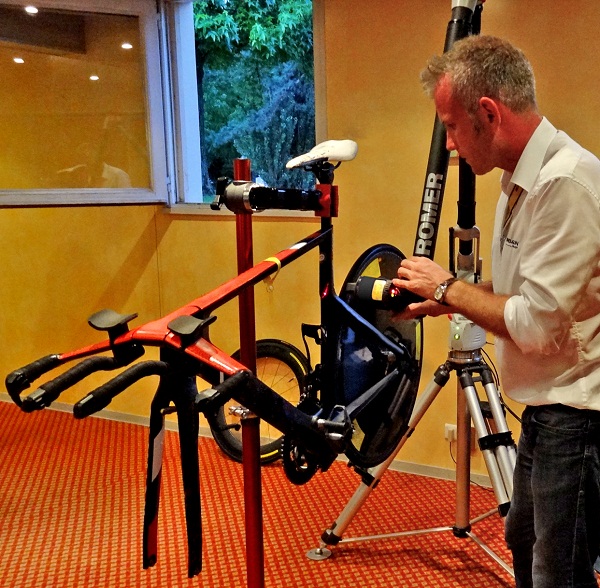 The tests took place immediately after stages eight and nine of the Tour in Porrentruy in Switzerland and Besançon in France. This represents the first time that the technology has been applied at a bicycle racing event of this significance.

Julien Carron, UCI’s Technical Coordinator, said: “Using the ROMER Bike Measurement System at the Tour de France is a crucial step in applying the rules consistently, for absolute fairness in the race and transparency in our sport. It has enabled us to check the competitors’ frames on-site quickly, accurately and with the minimum of disturbance to the teams.”

The ROMER Bike Measurement System is a portable 3D scanning system, developed in Switzerland by Hexagon Metrology in close collaboration with the UCI and the Laboratory of Polymer and Composite Technology (LTC) at the Swiss Federal Institute of Technology (EPFL). The system is based on Hexagon Metrology’s portable measuring arm, the ROMER Absolute Arm with integrated laser scanner.

ROMER
ROMER is the originator of the portable measuring arm (first created in 1986 in Montoire, France). The technological advance, the know-how, the demand for constant quality in the manufacture of the arms, the international presence are the main strengths of ROMER. Other products from ROMER include scanning probes for reverse engineering, non-contact probes for tube inspection and milling of raw materials. www.romer.com

company offering of machines, systems and software is complemented by a wide range of product support, aftermarket and value-added services.