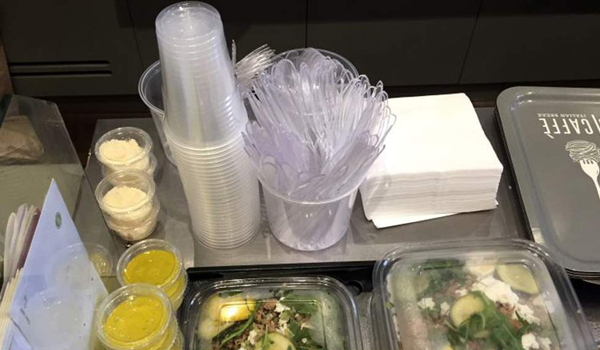 Critics say the proposed move to remove plastic cutlery, plates and cups from airline flights could actually harm the environment.

Airlines in Europe could feel the brunt of a possible plastics ban proposed by the European Commission, a move that is an attempt to reduce pollution in the world’s oceans.

According to a European Commission press release, the ban would target single-use plastic commodities such as cutlery, plates, straws and drink stirrers. Yet, officials in the airline industry say the ban would not only conflict with current catering waste policies, but it would also have an impact on environmental protection, according to a report by AINonline.com.

Jon Godson, the IATA assistant director for aviation environment and best practices, described the issue with the proposed ban to AINonline. Current international rules dictate that catering waste coming into the European Union must be burned or buried in deep landfills to stop the spread of disease. Similar rules apply in other non-European countries, and regulators in the European Union also tend to burn waste from flights within the EU as a precaution as well.

“If all plastics are banned, then we end up in a situation where we have to return to ceramics and this will have a CO2 impact,” he said.

Some airlines have already begun a reduction in their use of plastics. AINonline reported that Ryanair has promised to transition to using biodegradable cups, wooden cutlery and paper packaging on its aircraft by 2023. Additionally, Alaska Airlines will stop using plastic straws, and will replace single-use plastic stirrers with wooden picks in its lounges and airplanes starting July 16.

According to IATA, the next steps involved in making the plastics ban a reality will be for the Commission’s proposals to go before the European Parliament and Council to be enacted. The Commission encourages its proposals to be viewed as a priority file, and to provide Europe with actual results before the May 2019 elections.

Jyrki Katainen, vice president of the European Commission, outlined the benefits of banning single-use plastics in the press release. “This is an opportunity for Europe to lead the way, creating products that the world will demand for decades to come, and extracting more economic value from our precious and limited resources,” he said. “Our collection target for plastic bottles will also help to generate the necessary volumes for a thriving plastic recycling industry.”