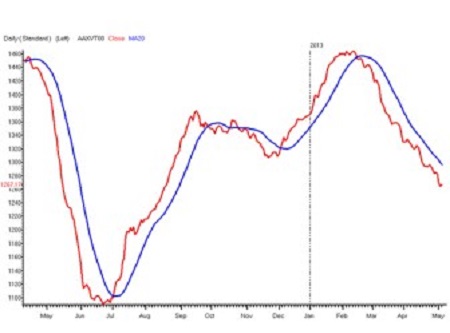 Prices in the global petrochemicals market fell 5% to US$1,309 per metric ton (/mt) in April, according to the monthly Platts Global Petrochemical Index (PGPI) just released at the 2013 Asia Petrochemical Industry Conference.The PGPI showed a similar 5% month-over-month decrease from February to March. On a year-over-year basis, the data showed petrochemical prices last month were down 9% from the April 2012 average price of US$1,444/mt.

Olefins, a group of hydrocarbon compounds which are the building blocks to many petrochemicals, saw the greatest price declines of the PGPI last month. “Ethylene was particularly weak,” said Jim Foster, Platts Senior Petrochemicals Analyst. “Not surprising since crude oil prices declined, as did naphtha prices. With naphtha determining the marginal price for ethylene, ethylene prices had to follow.”The average price of ethylene in Asia fell 5% in April to US$1,232/mt, as measured on a cost and freight basis to China.

Asian buying of ethylene slowed last month as the cost of raw material inputs for petrochemicals fell and downstream demand weakened, partly for plant maintenance reasons.There were many instances of buyers in Japan and South Korea offering ample May-loading cargoes in April, ahead of scheduled maintenance planned for downstream operations May. South Korea’s Hanwha Chemical is set to shut its 200,000 mt/year No. 2 vinyl chloride monomer line in Yeosu May 20 – July 10 for maintenance, and its 190,000 mt/year No. 1 line in Yeosu for a week following the restart of its No. 2 line.

Japan’s Tosoh plans to shut its 260,000 mt/year No. 1 VCM plant in Nanyo May 16 – June 25 for maintenance, and its upstream 1.125 million mt/year caustic soda and 1.2 million mt/year ethylene dichloride plants at the same complex during the same period.These planned closures are expected to further decrease demand for ethylene.

Pressure on ethylene prices was not isolated to Asia, Platts notes. The global ethylene index was US$1,249/mt in April, down 7% from the March 2013 average of US$1,349/mt. On a year-over-year basis, ethylene prices fell 10% last month. As a result, low density polyethylene (LDPE), which is produced from ethylene and used to make thin film for food and other packaging and coatings for cables, saw a 5% price drop in April to US$1,460/mt from US$1,538/mt in March.

The Platts Global Naphtha Index averaged US$558/mt in April. This marked an 11% slide from the March average of US$629/mt in May. The naphtha index was down nearly 20% from April 2012. Naphtha was lower on a month-over-month and year-over-year basis, largely in response to declining crude oil prices. The price of Dated Brent crude oil slipped 6% last month to an average $103 per barrel.

Propylene, the second olefin component of the Platts Global Petrochemical Index, was also lower in April. It fell to 6% to US$1,247/mt last month versus the March level of US$1,331/mt. Polypropylene, which is produced from propylene, fell 3% in April to US$1,477/mt.”Market sources believe propylene derivatives in Asia could see price support in the near future, given that a number of major producers have announced cuts in operating rates, which will limit supply,” Mr Foster said. “However, any sustained weakness in downstream demand could cap any gains.”

Prices of aromatics, a group of scented hydrocarbons with benzene rings, used to make a variety of petrochemicals, were mostly lower in April, also following energy prices lower. For example, the Global Toluene Index averaged US$1,133/mt in April, marking a 5% decline from the March level of US$1,197/mt. However, on a year-over-year basis, toluene prices were up 2% compared to April 2012.

Paraxylene prices fell 5% in April to US$1,406/mt compared to the prior month’s average of US$1,472/mt. But on a year-over-year basis, prices of paraxylene, like toluene, were up 2% versus the April 2012 average.The Global Benzene Index was the only price component of the PGPI to show an increase in April. It edged up 1% to US$1,315/mt in April following a March level of US$1,301/mt. Compared to the same time a year ago, the Global Benzene Index was up 6% in April.

Petrochemical prices last month moved counter to price trends in the global equity markets. The Dow Jones Industrial Average (DJIA) rose 2% month-over-month in April. The London Stock Exchange Index (FTSE) edged up less than 1%. But in Asia, the Nikkei 225 was up a robust 12%.PGPI is a benchmark basket of seven widely used petrochemicals and is published by Platts, a global energy, petrochemicals and metals information provider and a top source of benchmark price references.

Spot PE prices turn up in Italy after 15 weeks