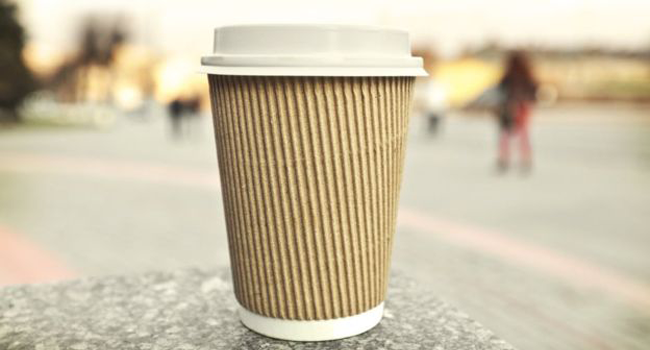 It’s gradually becoming common knowledge that it’s not as easy to recycle your takeaway coffee cup as people may have thought.

It’s the mixture of paper and plastic in their inner lining – designed to make them both heat and leakproof – that causes difficulties.

There are currently only a small number of specialist plants in the UK able to process the disposable used cups, and as a result, the vast majority of them (more than 99.75%) don’t get recycled.

In 2011 it was estimated that 2.5 billion coffee cups were thrown away each year and that figure is likely to be higher now.

Some of the biggest sellers of coffee in the UK, including Costa and Starbucks, say they have started recycling coffee cups, but that’s only if customers dispose of their takeaway cups in store.

Hugh Fearnley-Whittingstall: ‘Wanton Waste’
Four solutions to the disposable coffee cup problem
Cup waste: What are coffee chains doing?
Ace UK, the representative body for beverage carton manufacturers, has 415 recycling points for coffee cups and other paper products across the UK. Cups deposited here will be taken to the company’s own specialist recycling plant.

They are generally in places like car parks rather than on the street.

Cups that are left on the kerb in household recycling or in a bin on a high street or railway station, however, will generally end up in landfill.

Industry body the Paper Cup Alliance says the specialist plants that do have the technology already have the capacity to recycle all the cups we throw away – it’s the infrastructure to transport them there that’s currently lacking.
A growing number of retailers and offices are buying compostable cups and one of the biggest providers in the UK is Vegware, which makes its products without any plastic so they biodegrade.

It sells compostable cups to office canteens, schools, hospitals and independent coffee shops and its sales have increased by more than a third in the last two years.

However, compostable cups have to be disposed of in food waste bins rather than in a normal recycling bin and this is an issue for both homeowners and managers of cafes or workplace canteens.

Trewin Restorick, at environmental charity Hubbub, believes the right disposable method is not always clear to people and says: “Compostable sounds better, but it can actually make things worse if they are put in the wrong bin.”

Because they are designed to break down, if they end up in with the plastic recycling they can contaminate it. The same is true if you put an ordinary takeaway coffee cup in the recycling.

This costs councils money in sorting it and can even lead to the whole batch of recycled items being rejected.