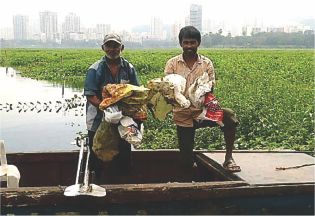 In 2009, the United Nations Environment Programme released a report analyzing the marine litter found in 12 different parts of the world., The United Nations Under-Secretary General Achim Steiner; when he read the results, called for a ban on single-use plastic bags.

Plastic bag pollution is a huge problem in water bodies across the world. Plastic bags account for most of the debris, according to a 2009 publication by the United Nations Environment Programme. Plastic bags do more than destroy the aesthetics of beaches and waterways. They choke aquatic and other types of wild life. Estimates are that plastic debris kills over 100,000 marine turtles and mammals every year.

Plastic bags are made from polymers or polymer resin, both of which require oil or natural gas to manufacture. According to the New York Times, the 100 billion bags used per year in America require an estimated 12 million barrels of oil in their production.

One of the most common chemicals in plastics is Bisphenol A. This compound has been linked with an array of afflictions like diabetes, heart disease, breast cancer, thyroid disorders, infertility, early-onset menstruation and obesity. For most people, plastic bags are a part of everyday life, but their effect on aquatic life, and the environment are causing many to take a second look. Plastic Water Bottles and Shopping Bags do not come with our shopping lists, but, unknown to most of us, dangerous compounds contained in household plastics are leaching into ecosystems and entering the food chain.

The most common symbols of our disposable culture are Soft Drink and other Beverage Bottles, Coffee-stirrers, Fast Food Spoons and Forks, Styrofoam (e.g. thermocole), broken Containers, Buckets, Mugs, Packaging, and above all PLASTIC BAGS. Plastic wastes choke water bodies across the globe. This form of pollution is one of the biggest environmental problems we face, and is getting worse as plastic production continues to grow. We as individuals can adopt the catchwords : ‘Reduce, Reuse, Recycle’ with ‘Refuse’ and ‘Remove’, urging us to really think about where our waste goes, and to refuse plastic bags.

We also need to lobby our governments to take strong action against toxic plastic products. But most importantly Local groups or Organizations involved in this issue to need to join the expanding group of activists the world over. So get involved! The Naushad Ali Sarovar Samvardhini (NASS) – An Association for Lake Conservation. NASS is aided and supported by The Maharashtra State Angling Association (MSAA) Powai Lake and Indian Association of Aquatic Biologists (IAAB). Is founder Members of NASS are Dr Pramod Salaskar; PhD Thesis – Environmental Aspects of Powai Lake., Dr S,G Yeragi of Somaiya College, Mr Gordon Rodricks of MSAA. NASS, MSAA and IAAB recently organized an International Conference held on the 7th and 8th September 2012 as at Shipping Corporation of India Powai.

The Ministry of Environment and Forest New Delhi gave its support to the Seminar and Conference which was addressed by Dr.R. Dalwani Director Ministry of Environment and Forests New Delhi. At the conclusion of The Conference, NASS/MSAA/IAAB proposed amongst several activities The Removal of Plastic Bags and Floral offerings. Plastic Bags containing Domestic Waste and Garbage, and discarded Floral Offerings are dumped into Powai Lake in alarming quantities. The extent of this pollutant can be visibly seen from the banks of the lake, from what is floating and accumulated around the periphery.

But if one scrapes the Lake Basin more can be dredged out. In fact it is no exaggeration to assume that parts of the lake basin might be carpeted with plastic bags. In pursuance of the proposal at the International Conference, The Maharashtra State Angling Association have promptly renewed their efforts to remove these plastic bags by deputing its staff to make rounds of the Lake daily. Plastic collected is weighed for records.

Within a few days over 60 Kgs of Plastic Bags have been removed from part of the lake basin. This activity will be pursued round the year. Students from some colleges have also volunteered to join MSAA in this activity, and we are hopeful that over time a significant of this plastic debris will be removed.

Author plasticsinfomart 91
Since the day we were born, we have always heard that we should recycle plastic. Blue bins are ubiquitous across the globe. Recycling is...
Read More

The plastic timeline: How did we get here?

Author plasticsinfomart 110
Situated outside a Kroger in Arlington, TX, is a new structure that resembles a slimmed down drive-thru restaurant or the world’s longest ATM. It’s...
Read More