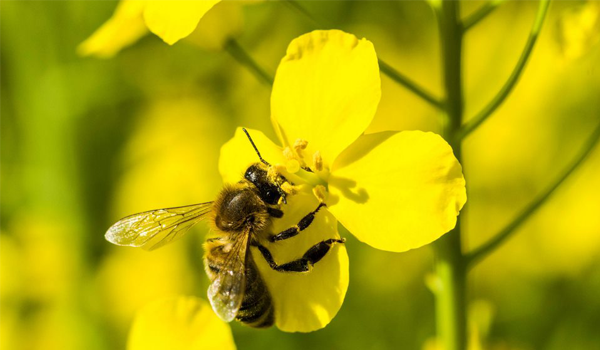 The European Commission voted last week to ban three common pesticides that are thought to contribute to the decline in the bee population — imidacloprid, clothianidin and thiamethoxam. Taken together, they are the most used pesticides in the world. Six years ago, the European Food Safety Authority concluded that the chemicals were harmful to bees. The ban takes effect in 6 months — which will be after the current growing season in Europe.

All 28 members of the EU endorsed the ban. “This is a major victory for science, common sense and our under-threat bees. The evidence that neonicotinoid pesticides pose a threat to our bees is overwhelming,” says Emi Murphy from Friends of the Earth. In February, EFSA, the EU’s principal scientific risk assessment agency, reported a high risk to both honeybees and wild bees resulted from using those chemicals outdoors because they infiltrate wildflowers and succeeding crops as well as the original crop. Their use will still be permitted in greenhouses.
Plastic Recycling Action
China has recently closed it ports to plastic waste from abroad. That has had a knock-on effect on all the nations that used to bundle up their used plastic and send it China. Out of sight, out of mind was the operative thinking. That has all changed.

Frans Timmermans, the European Commission’s first vice president for sustainable development says: “If we don’t change the way we produce and use plastics, there will be more plastics than fish in our oceans by 2050. We must stop plastics getting into our water, our food, and even our bodies. The only long term solution is to reduce plastic waste by recycling and reusing more. This is a challenge that citizens, industry and governments must tackle together.”

Three quarters of Europeans say they are concerned about the effect of plastic waste on their health. Almost 90% are concerned about the effect plastics have on the environment. The problem with plastic waste is that it has little commercial value. The European Commission’s Plastic Strategy hopes to tackle that issue with new regulations that require more plastics to be recyclable and more plastic products to contain recycled plastic. The EU is investing millions of Euros into research that will lead to better, more cost effective recycling programs. The goal is for half of all plastics used in the EU to be recyclable by 2030.