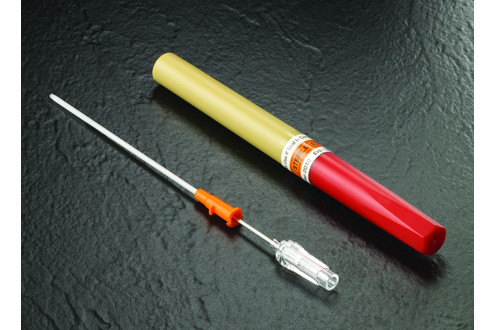 “The mold has two ejector halves that rotate on the turntable,” says Patrick Collins, molding operations manager at Matrix. “As the one side is being injected with plastic, the other is being ejected and loaded.”

Matrix has three sets of core/insert mandrels that are for now being hand loaded. Design of the core/insert mandrels includes a detent that can be actuated by a lever on the mandrel to hold the stainless-steel needles, allowing the inserts to be held in place as they are being molded.

“Tom Ziegenhorn, one of our design engineers, and I met this new customer while working a trade show. Tom was able to visualize that the customer needed to replace a costly manual process with a more cost-effective insert molding process.”

Ziegenhorn designed a mold that was built by a team led by Mike Martin and Gary Eckman. The tool was qualified by an inspection team led by Gary Johansson.

One of the attractions of the Engel system is a flexible controller that manages the mechanics of the tool and also allows for future improvements to the process, such as cutting the catheter tube to length within the mold.

More automation planned
“Although we’re still in the initial stages with this project, and we are hand-loading the inserts at the present time, we have realized there are many automation possibilities. We plan to automate this process with a side-entry robot as the production volumes ramp up.”

Matrix operates a 30,000-sq-ft facility employing about 50, working three shifts. It operates 14 electric and hydraulic molding machines ranging from 5 to 300 tons in clamping force, including two presses in a Class 100,000 cleanroom.

Medical Musings: A White House discussion on PVC in hospitals

Data is revolutionizing the maritime industry

K-Tron with Coperion at Chinaplas in Guangzhou, China