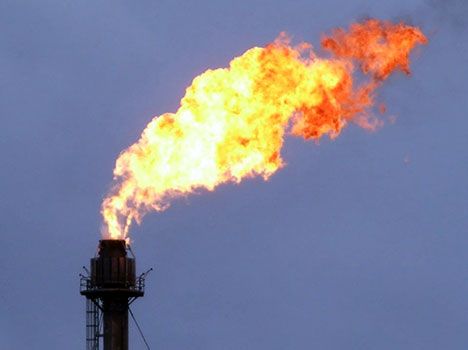 America’s vast supply of natural gas is getting even bigger. And prices are falling even lower.

The price has tumbled 30 percent this year because of a production boom that’s kept the nation’s stockpiles well above normal levels.

Cheap gas helped cut heating bills for the majority of U.S. homeowners who burn natural gas, along with mild weather. Many utilities use natural gas to generate power, so it could also be less expensive to run air conditioners this summer.

The latest government data shows that the energy industry continues to store natural gas at a faster clip than Americans can consume it. The Energy Information Administration report said U.S. supplies expanded by 42 billion cubic feet last week. Analysts were expecting supplies to grow between 33 billion to 37 billion cubic feet, according to Platts, the energy-information arm of McGraw Hill.

The country’s total supply is now 60.5 percent higher than the five-year average. It has expanded by so much, and so quickly, that analysts now wonder if the country’s pipelines and storage facilities will eventually run out of room.

Weather should help determine where prices go from here. Forecasters are calling for a pleasant spring throughout much of the country. Other than a possible chance of snow in Maine, AccuWeather.com meteorologist Alex Sosnowski said he expects this weekend to be tranquil across the Southeast, Midwest and West.

Analysts are betting on good weather and even lower natural gas prices. They’re “going to continue to go down,” said independent commodities trader and analyst Stephen Schork. He expects natural gas to dip below $2 per 1,000 cubic feet at some point this year. That would be the first time since September 2001.

Schork said the price should fluctuate with forecasts for summer weather. A heat wave would boost power demand — and natural gas prices — as people crank up the air conditioning. But still, the price would have to more than double to reach the peak seen last summer.

Meanwhile, oil rebounded Thursday after a two-day drop that pushed prices to the lowest level since mid-February.

“We’ve fallen pretty hard, pretty quickly” and many investors are jumping back in on the expectation that prices are headed higher, said Peter Donovan, a broker with Vantage Trading.

Donovan also noted that the New York Mercantile Exchange is closed for Good Friday, and investors tend to buy oil futures contracts ahead of long weekends. They do so as an insurance policy against any military action, offshore spill or other development that would constrict world supplies and push the price of oil higher, he said.

The government also is scheduled to release a new jobs report Friday that could show another increase in the number of working Americans. A growing workforce usually means more cars commuting daily. That could push gasoline and oil demand higher.

Retail gasoline prices rose by nearly a penny to $3.936 per gallon, according to auto club AAA, Wright Express and Oil Price Information Service. The national average is the highest ever for this time of year, and analysts say it could rise as high as $4.35 per gallon by the end of April.

Gasoline is the highest in Hawaii at $4.604 per gallon and the cheapest in Montana at $3.724 per gallon.

In other energy trading, heating oil was almost a penny higher, finishing at $3.1692 per gallon while gasoline futures rose slightly to end at $3.3405 per gallon.

Author plasticsinfomart 18
The 42 percent, four-month rebound in rubber prices may be coming to an end as global tire demand plunges the most in three decades....
Read More

The slow acting poison of plastic