Industry lobbying may have helped block a state legislative effort to limit use of disposable shopping bags earlier this year, but local environmental advocates see victory in the growing numbers of cities and towns that banned the bag. 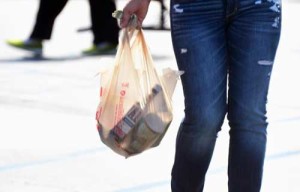 “We’re basically living in this disposable society that was invented in the 1970s, and we have to change this,” said Ken Weiss, a Framingham man who successfully petitioned his town to adopt rules limiting plastic bags.

Ban regulations are being considered in Boston, Springfield, Franklin, and Easthampton, while Brookline could tighten its existing bag rules, and officials are expected to enact their own in Natick.

According to the Sierra Club, a total of 35 Massachusetts communities have regulations that govern plastic bags on the books.

“I think this thing has tremendous momentum right now. The bans are happening,” Wadsworth said.

American shoppers depend on disposable plastic shopping bags — it’s hard to imagine a modern retailer without a rack of them near the end of a checkout line, where just about anything we buy seemingly ends up inside a crinkly plastic bag.

But that mindset is what advocates want to change.

“We don’t need to put each piece of produce in a separate plastic bag,” said Andrew Fischer, a Brookline resident hoping to win backing for tighter controls on plastic bags at next month’s Town Meeting.

There’s no doubt Americans use a lot of plastic: The US International Trade Commission reported in April that Americans consumednearly 103.5 billion single-use plastic bags in 2014, almost 9 percent more than in 2009.

Single-use plastic bags were identified as a threat to marine life in a 2009 United Nations report, and a UN official at the time said the bags “should be banned or phased out” because of the risk.

“We’re drowning in this stuff,” said Clint Richmond, who is working with Fischer on Brookline’s stricter bag rules.

In Franklin, the local town council was presented on Oct. 19cq with regulations for a proposed plastic bag bylaw that would prohibit many businesses from distributing them in town. A town subcommittee will discuss the proposal within the next 30 days, said Town Administrator Jeff Nutting.

James White, Natick’s director of public health, said local officials hope to vote on rules limiting disposable bags next month. He said the town decided to move ahead with local rules after waiting for the state to impose its own.

“It would be so much easier if it was done at the state level and trickle down to the [local communities] and it was completely uniform,” White said.

But in the spring, state lawmakers failed to pass a state Senate budget amendment that would have eliminated single-use bags at retailers 3,000 square feet or larger.

The proposal was opposed by a mix of industry groups representing plastics manufacturers, retailers, and restaurants.

State Senator James Eldridge, who won Senate support for state plastic bag rules last spring, said he will file a new bill for the next legislative session in January.

The Acton Democrat said he wants to work with business and industry groups to come to develop bag rules, as more and more communities consider local laws. He said a “common sense solution” would be to ban disposable bags at large retailers and encourage the use of reusable bags.

“I think there is a lot of momentum going into the next session to pass a statewide ban,” Eldridge said.

Lee Califf, executive director of the American Progressive Bag Alliance, a plastics industry group among those that opposed the statewide bill, said bans on plastic bags threaten an industry of recyclers and manufacturers that employ 25,000 nationwide.

“A ban doesn’t make any sense at all, economically or environmentally,” said Califf.

The group spent just $6,000 on its lobbying efforts in Massachusetts last spring. But in California, APBA has spent more than $6.1 million opposing a November ballot referendum asking voters to approve a state-wide law blocking most stores from giving customers single-use plastic bags, according to California lobbyist data.

The organization has also opposed bills that would impose fees on plastic bags in Delaware and Maryland.

“We are seeing a lot of efforts to do that across the country, and it is something we are concerned about,” said Califf.

But stopping similar rules in hundreds of cities and towns would be much more difficult, environmental advocates said.

“Town Meeting members are less influenced by outside external forces like lobbyists, and because of that, they are more successful,” said Framingham’s Weiss.

Newton City Councilor Alison Leary, whose community approved a plastic bag ban last year, said local action was more effective because the city could focus on limiting the use of disposable bags by large chain retailers.

But switching to paper bags has its own cost, Wadsworth said. For every truck hauling plastic bags for Wegmans, the chain needs seven trucks to carry the equivalent number in paper bags.

He said the company offers plastic recycling at each of its 91 stores, including for its plastic bags. The company would support state-level rules focused on reuse and recycling bags, he said.

But Leary said it’s better to stop using plastic bags entirely instead of looking for ways to make recycling them easier.

“We can’t recycle our way out of the trouble we have,” Leary said.