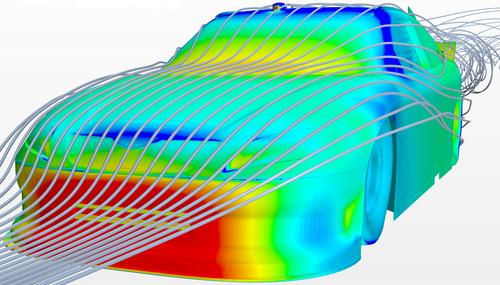 Michael Waltrip Racing is fresh off a spate of recent wins and its best season since its 2007 inception as a NASCAR racing team. Along with rising stars Clint Bowyer and Martin Truex Jr., who helped earn the team its first two Chase for the Sprint Cup berths, Michael Waltrip Racing is crediting changes to its aerodynamics design process as a key to its new competitive edge.

Likening the cutthroat competition of NASCAR to a “arms race,” MWR aerodynamics manager Andy Hogg told us testing through digital simulation better prepares his team for battle. “Speed is crucial and not just on the track,” he said in an interview. “Design speed is a critical measure of our success.”
MWR’s traditional aerodynamics design processes were not that nimble, according to Hogg. The organization is tasked with making 35 cars a year to compete and it’s always relied heavily on wind tunnel testing to explore different design ideas for modifying the standard NASCAR design to get a leg up on the competition.

The problem with that approach was that the team was limited in terms of how many ideas it could try out in the wind tunnel, and it was really a matter of guesswork as to which ones had the best potential, Hogg said. “Without CFD, we didn’t really understand the flow characteristics of the car so it was hard to make changes that worked,” he said. “It was more of a guess and check.”

Today, while it doesn’t use the wind tunnel any less (MWR tests about 30 design changes per month in a wind tunnel), it does employ the technology differently — specifically, in a more intelligent fashion. Leveraging cd-Adapco’s Star-CCM+ Computational Fluid Dynamics (CFD) software, MWR engineers now run all possible ideas through digital simulation to prove out their viability before hitting the wind tunnel with a select few for validation.

Before, we had more ideas than we could test, but we would just guess at the ones with the most potential. Today, we might run through 60 ideas a month in simulation and pick the best 30 from CFD. It gives us a much better shot of them working out in the wind tunnel.
While the NASCAR teams work off a standard design, Hogg said there’s a huge amount of tweaking and refining of parts and small improvements every week to get that tiny leg up on the competition. “People don’t realize how much innovation and rate of improvement determines a team’s success during the season,” he said.

Having the flexibility to fully explore a range of possible design options in the digital world is critical for a team that is a relative newcomer in the competitive and well-established world of NASCAR. Moving forward, Hogg expects to take advantage of cd-Adapco’s cloud-based simulation capabilities, especially when the new car body design for next year is announced in the next couple of weeks. Cd-Adapco’s Power-on-Demand offering lets customers run Star-CCM+ in a cloud-based session using on-demand cloud computing services like Amazon EC2. Running CFD simulation in the cloud will allow a bunch of design work to be done in parallel, Hogg said, which is critical to achieving that edge right out of the gate:

We already have time on [cd-Adapco’s] cloud offering on hold, and as soon as we get the go-ahead that this is the package, we’re going to swamp the cloud with simulations — way more than we could ever do on our own hardware. That gives a short-term burst (for simulation), which we couldn’t afford to maintain all year round.

Author plasticsinfomart 86
A proposed ban on carryout shopping bags in Los Angeles was delayed on Friday as city lawmakers asked for further studies on the economic...
Read More

Author plasticsinfomart 83
Exports of Thailand-made plastic products are expected to hit US$3 billion this year, according to a report on www.udnbkk.com on August 23, well exceeding...
Read More

Author plasticsinfomart 83
Cables constructed in layers are significantly cheaper to produce, therefore some manufacturers offer ‘continuous-flexing cable’ with this low-cost approach. However, these cables are often...
Read More