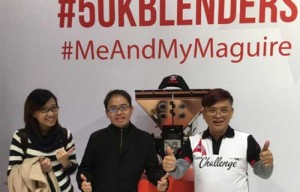 Singapore-Based Producer of Bottles for Petrochemicals and Household Chemicals, with Plants in Four Countries, Is the Second of Five Winners to Be Announced

SINGAPORE, November 16, 2016: King Plastic Pte Ltd. has won a USD $500 award in a drawing held by Maguire Products, Inc. as part of a year-long “50K” celebration to mark the sale of the 50,000th Maguire® gravimetric blender.

The award to King Plastic is part of a Maguire digital campaign on Twitter and LinkedIn to thank customers by offering them a chance to win one of five $500 prizes in a random drawing. There has been one other winner thus far: Amesbury Truth, a leading North American manufacturer of window and door components.

“To celebrate our 50,000th blender, Maguire has sent a special customized ‘50K Blender’ on a global tour that by the end of this year will have reached 40 customer sites on five continents,” said project manager Jeffrey Siew, the Maguire representative serving King Plastic from the Singapore headquarters of Maguire Products Asia Pte Ltd.

The 50,000th sale is a landmark for the industry, noted Hubert Nerlich, managing director of Maguire Products Asia. “When Maguire president Steve Maguire developed the gravimetric batch blender in 1989, it was the first affordable and easy to operate system for precisely controlling the composition of a raw material blend,” said Mr. Nerlich. “Today the Maguire blender is the world’s most widely used gravimetric blender and has been installed in every type of plastics manufacturing operation, from compounding to extrusion to molding.”

A gravimetric batch blender sequentially dispenses each batch ingredient in its target proportion into a weigh chamber; then, by monitoring each gain in weight of a batch, the blender control makes adjustments to subsequent batches to maintain accuracy and control raw material consumption. The Maguire system holds batch accuracy to within +/- 0.1%