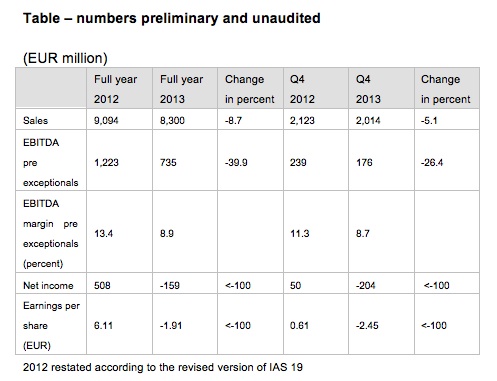 Cologne – Specialty chemicals company LANXESS has undergone impairment tests, according to IAS 36, that result in exceptional charges of EUR 257 million in the fourth quarter of 2013.

Due to the expected development of overcapacities, as well as raw material and energy costs, a competitive environment is anticipated in which future cash flow contributions no longer reflect the book values of the business units Keltan Elastomers and High Performance Elastomers (Performance Polymers segment), as well as Rubber Chemicals (Performance Chemicals segment).

The impairment charges are being incurred financially in the fourth quarter of 2013 and affect EBIT and net income in 2013. They are, however, not cash relevant.

The above-mentioned impairment charges, together with exceptional expenses of about EUR 30 million, brought forward within the “Advance” efficiency program, result in a negative net income and earnings per share (EPS) in the fourth quarter of 2013, as well as full year 2013.

For the full year 2014, LANXESS expects a slightly improved EBITDA pre exceptionals due alone to the absence of one-off items, even if selling prices remain at low levels. LANXESS will publish its final full-year results for 2013 on March 20, 2014.

Paid Plastic Bags to Start on February 2016, Prices Yet to be Set