This schematic diagram shows the overall conceptualization of how metabolically engineered E. coli produced a variety of PLGAs with different monomer compositions, proposing the chemosynthetic process of non-natural polymers from biomass.

Distinguished Professor Sang Yup Lee of the Chemical and Biomolecular Engineering Department at the Korea Advanced Institute of Science and Technology and colleagues are the first to produce a viable method of producing common plastics used in the medical industry without petroleum. The first polymer created with a sustainable process is also biodegradable. The discovery was announced in the March 7, 2016, edition of the journal Nature Biotechnology. 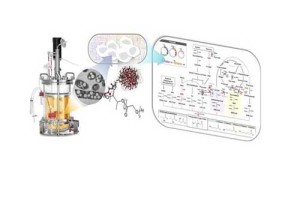 The process depends on a species of Escherichia coli (E. coli) that was genetically tailored to produce poly(lactate-co-glycolate) (PLGA). PLGA is presently used in surgical sutures, prosthetic devices, drug delivery, and tissue engineering because the polymer is biodegradable. The pathway to this discovery was found in the natural polymerization of polyhydroxyalkanoates. Polyhydroxyalkanoates are naturally produced polyesters made from bacterial fermentation of sugar or lipids.

The researchers expect the bacterial plastic making process to be extended to all types of plastic. The process simplifies the production of plastics by eliminating a number of processing steps and the need for the use of expensive catalysts. Plastics made with this process will cost more initially but when the process is up to full scale operation the cost will be less than what plastics presently cost.

Most plastics are produced from petroleum at present. Plastic production is about 300 million tons per year. The new process reduces the need for petroleum as a starting point for plastic and produced plastic that can be biodegraded. Plastic that disposes of itself eliminates the need for waste disposal, recycling, and could prevent the contamination of the world’s oceans with plastic.