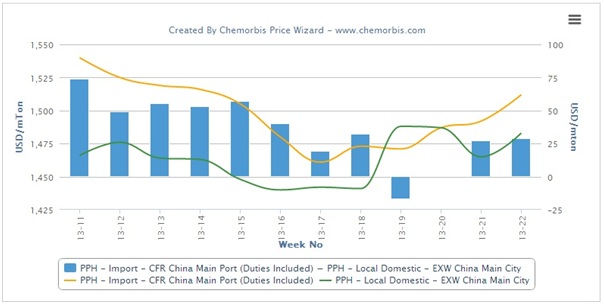 Overseas producers are announcing higher June PP prices to China even as local prices in the country have edged lower, causing import homo-PP prices to regain their premium against local materials as per the pricing service of ChemOrbis. Domestic PP prices had risen to around par with imports at the start of May following five consecutive months in which import PP prices had enjoyed a comfortable premium over local materials.

The premium carried by import prices over domestic material had risen to a high level of around $90-95/ton around the start of March before declining gradually over the next several weeks and finally returning to par towards the beginning of May. Following a brief period close to par, imports have regained their premium over the last two weeks as overseas producers have lifted their June prices in line with bullish global sentiment and stronger upstream costs while disappointing demand and sales pressure stemming from producers’ efforts to meet their May sales quotas pushed domestic prices lower. After taking customs duties into consideration, import cargoes now carry a premium of around $25-30/ton over domestic cargoes.

A trader based in Shantou commented, “We received June prices from a Saudi Arabian producer with $45/ton increases this week while domestic producers agreed to some price reductions in hopes of speeding up their sales before the end of the month.” A trader based in Shanghai stated, “We lifted our June prices for Saudi Arabian homo-PP by $30/ton in line with our supplier’s price hike. Our new offers did not meet with much interest as the steady to softer trend in place in the local market made buyers reluctant to accept higher prices.”

According to ChemOrbis, players’ complaints of disappointing PP demand are supported by April import statistics from Chinese Customs, which show declines of 7.7% month over month and 1.9% year over year in China’s imports of homo-PP.