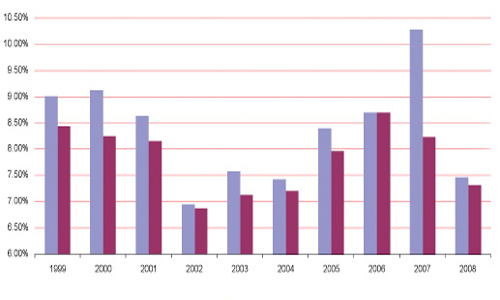 Leading petrochemical companies across the globe declared financial results for the fourth quarter of 2014 or full of that year as per ChemOrbis daily headline. Several companies revealed lower figures blaming lower energy costs, which lost more than 50% of their value since June, 2014 or reduced production whereas some others enjoyed higher figures owing to stronger sales or wider margins.

In Europe, Belgium’s Solvay reported that adjusted net income soared to €208 million in Q4 from €25 million in 2013. The group’s net sales increased 8.9% from the previous year to be reported at €2.574 billion. Hungary’s TVK posted a net profit of Forint 15.0 billion (USD60.7 million) in the fourth quarter of 2014, up from Forint 414 million a year ago amidst its doubled integrated petrochemical margin year on year. TVK’s production in the last quarter of 2014 was up 11.7% year on year including a gain of 8.8% in olefins and a 17.5% increase in polymers. TVK’s sales revenue inched up 0.8% year on year to Forint 105.6 billion in Q4, amidst increased sales volume and lower product prices.

Spain’s Repsol saw an adjusted net income at €370 million from €21million in the same quarter of 2013, thanks to a sizeable increase in sales of petrochemical products. Its profit tripled on higher refining margins, which counterbalanced falling crude oil costs, as well as production in Brazil.

Meanwhile, Eni Spa’s adjusted operating income slumped 34% on the year to €2.32 billion (USD2.64 billion) in the fourth quarter of 2014 due to sharp decreases in oil prices. The Italian company’s adjusted net income dipped 64% to €464 million while sales decreased 10% to €26.8 million. Eni will cut their capital spending this year by €2 billion to save an additional €500 million.

In Asia, Thai Indorama Ventures reported hike of 12% in earnings in full year of 2014 compared to 2013. Its reported earnings after extraordinary and non-cash items in 2014 hit THB1.48 billion. Indorama Ventures (Bangkok), on the other hand, reported a net loss of 890 million baht (USD27.3 million) for Q4 2014, compared with a net loss of THB456 million in the fourth quarter of 2013.

Among Middle Eastern companies, Kuwait’s EQUATE Petrochemical Company announced a net profit of USD1.04 billion for full 2014 with respect to USD 1.245 billion posted in 2013. Saudi International Petrochemical Co (Sipchem) posted a profit of 132.4 million riyals (USD35.28 million) in Q4 2014, down 33% with respect to a profit of 196.8 million riyals year on year. The company blamed a plant shutdown for lower production and sales for the results.