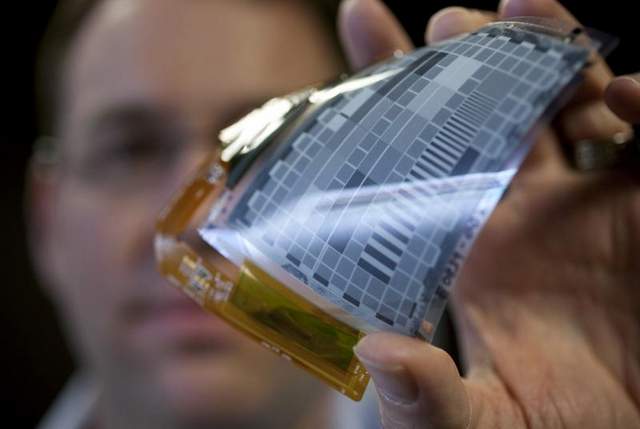 In the film The Graduate, cynical young protagonist Benjamin Braddock is pulled aside by an elder with sage advice: “Just one word. … Plastics,” he whispers. “There’s a great future in plastics.”

The line became part of Hollywood lore, underpinning the yawning gulf between the counterculture and the status quo.

But 45 years after it entered the American zeitgeist, the punch line is serious stuff for tech companies such as Samsung and Hewlett-Packard. Flexible-display technology, the pliable plastic casings that many predict will be the next iteration of laptops and tablets, is morphing into all sorts of cool gadgets of the near future.

The question, though, is when? And to what extent?

Flexible displays — computing screens that can be rolled, folded or flexed — can take the form of personal devices, such as an eReader, or larger surface displays, such as furniture or wallpaper.

Yet the flexible narrative has experienced fits and starts for years, and it still isn’t likely to take hold until 2015, said Sarah Rotman Epps, an analyst at Forrester Research.

The field is littered with noble failures and unfulfilled promises.

Philips Electronics spinoff Polymer Vision promoted its flexible eReader for years but declared bankruptcy before bringing the device to market. Hewlett-Packard has been developing printable Mylar displays that it imagines could be used for candy wrappers, armband computers for the military or living-room wallpaper, but the displays are still several years from commercialization.

The most likely scenario is that wildly popular tablets will be the first iteration of flexible technology.

But Epps said other emerging technology, such as wearables, embedded devices and mini-projectors, might catch on sooner when new manufacturing processes ramp up.

“Consumers would love to bend or fold devices,” said Bob O’Donnell, an analyst at market researcher IDC. “Rather than carry a phone and tablet, you could unfold a large screen from your phone.”

Any surface will do …

The promise of unbreakable, lightweight, non-glass displays has researchers and engineers at HP, Samsung and elsewhere toiling away in hopes of tapping into a potential gold mine.

Despite ups and downs, sales for flexible displays are expected to zoom to $8.2 billion in 2018 from $85 million in 2008, estimates Jennifer Colegrove, an analyst at NPD DisplaySearch.

“Flexible displays have been talked about for the last 10 years,” said Pat Moorhead, president of market researcher Moor Insights & Strategy. “Now, it’s about to be product-ized.”

Foldable technology is expected to take form in:

Wristbands
HP is developing prototypes with the U.S. Army of a wristband for foot soldiers that is something out of the old Dick Tracy comic strip. HP also is huddling with the NFL about the possibility of an electronic wristband for quarterbacks to view and call plays.

Soldiers would be fitted with a bendable wristband that could also be sewn into their uniform’s cuff. The small display could function as a combination Global Positioning System, shortwave radio and field manual for vehicle repairs. Such a device would significantly reduce the estimated 70 pounds of equipment typically lugged by soldiers, without sacrificing ruggedness.

A solar-powered wrist unit is set to undergo field testing by the military later this year, said David Morton of the U.S. Army.

The NFL could replace the balky helmet microphone now used with a plastic band for quarterbacks and defensive players to relay and view formations. The NFL had no comment.

Kitchen counters
Microsoft’s home of the future — think Ozzie and Harriet meets Futurama — is chock-full of digital displays, none more eye-catching than its fabulous kitchen counter.

The marble surface doubles as a display capable of input for ingredients and recipes. The graphics are beamed from an overhead projector, which could become a staple of homes within five years, said Jonathan Cluts, Microsoft’s director of strategic prototyping.

Cars
Toyota showed a model at the Tokyo auto show late last year and the Detroit auto show this year that it described as a “smartphone on four wheels.” In Tokyo, Toyota CEO Akio Toyoda unfurled the Fun-Vii (vehicle interactive Internet), which lets drivers change the car’s color — both exterior and interior. Flexible screens embedded in the car’s body allow the Fun-Vii to display multiple colors.

Products Made with Recycled Plastics: Give Your Home a Green Makeover

Author plasticsinfomart 108
With its stock down 14% over the past three months, it is easy to disregard Donpon Precision (GTSM:3290). But if you pay close attention,...
Read More