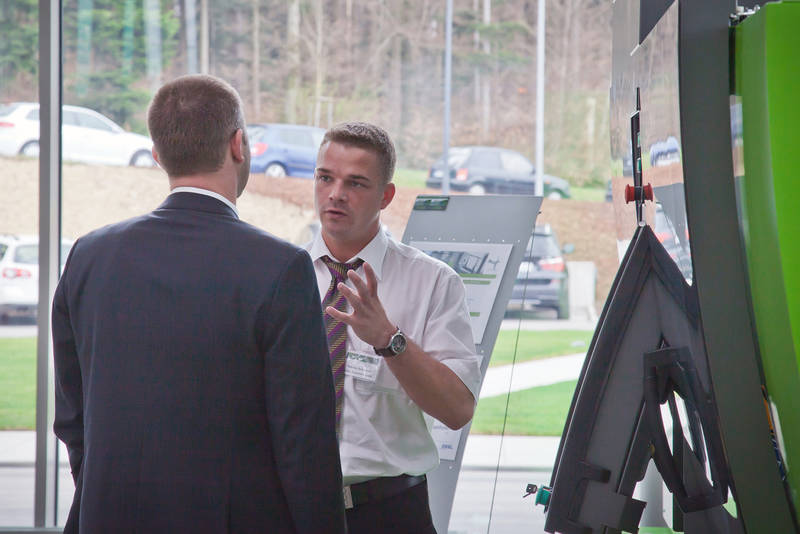 Schwertberg/Austria – April 2014: A year after its foundation, ENGEL Deutschland Technologieforum Stuttgart is taking stock, and the results are quite positive. The number of employees has been increased sooner than planned. The service offer on site is further expanded.

The ENGEL Deutschland Technologieforum Stuttgart, which is located in Wurmberg, is ENGEL AUSTRIA’s fourth sales and service branch in Germany after Nuremberg, Hagen, and Hannover. By opening the forum in April 2013, ENGEL moved significantly closer towards its customers in the southwest of Germany. “The share of technologically demanding system solutions with automation increases and requires a constantly intensified collaboration”, emphasises branch manager Claus Wilde. “With the new site we have created perfect conditions to achieve this”. Thanks to its closer proximity to the market ENGEL was able to acquire a lot of new customers over the course of the past year.

Forum events and trainings attract more than 1100 participants
With its particularly large technical centre and conference area the ENGEL Deutschland Technologieforum Stuttgart endeavoured to become an information and communication hub for the injection moulding industry in the southwest of Germany. “We have achieved this goal”, Wilde states. “Our events are very well attended throughout”.

The team in Wurmberg welcomed so far more than 700 guests to nine forum events and several workshops; plus another 400 participants of the training programme. The most sought after topics for the workshops were energy efficiency and optimised set-up. Both workshop series will be continued this year. Among the highlights in the 2014 event calendar are an automobile forum, the medical conference ENGEL med.con, as well as a large-scale machine day.

Constantly growing partner network
Another focus of the technical centre is the support of ENGEL’s customers in matters regarding applications, an offer readily accepted. “We can perform elaborate fittings and experiments for customers on site, on request also in private areas, protected from sight”, Wilde says.

ENGEL Deutschland Technologieforum Stuttgart works closely with partner companies and institutions, such as the SKZ in Horb and the Fraunhofer Institute in Pfinztal, and is actively involved in professional associations and networks, e.g. medial mountains and Innonet. As a result, the network of partners is constantly expanding. Furthermore, ENGEL is supporting training centres in the region.

Looking for new service employees
The number of employees has already risen in the first year. Currently ENGEL employs 25 people in Wurmberg. First and foremost, additional service technicians are to be hired this year. The new ENGEL subsidiary offered a special hotline for its customers from the very start. A sale of spare parts in Wurmberg is another project for the future.

“The rapid growth proves that we have struck the right path with the foundation of ENGEL Deutschland Technologieforum Stuttgart”, Claus Wilde stresses. “Now we have to bring our staff, our processes, and our offer in line with the demands of the market on a continuous basis. To this end we intend to make further investments”.

For ENGEL Germany is the most important market. The injection moulding manufacturer generates roughly a quarter of its global turnover in this market and was able to constantly expand its market shares. The new subsidiary takes account of these developments and at the same time lays the foundation for further growth.

Ampacet Expands its Footprint in Luxembourg