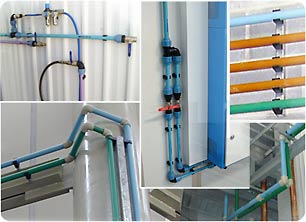 In Egypt, the former Industry and Foreign Trade Minister Mahmoud Essa had approved a decision imposing 15% or $267/ton in protection fees, whichever was higher based on the total import sum, on homo-PP imports effective as of June 5 until December 22, 2012, for 200 days, upon the local PP producer EPPC’s request, as per the pricing service of ChemOrbis.

In return for imposing the duties, an agreement was signed between EPPC and the government as of June 27. According to the agreement, the local producer was required to provide all of the market’s homo-PP needs and they would have to keep their prices in line with monthly global price announcements. The agreement also required a minimum monthly order amount of 50 tons from local buyers purchasing from EPPC.

However, market players have since been complaining that the producer has not been able to meet the needs of the market apart from raffia grade and that they failed to provide film grade. A film and injection products maker had previously complained, “EPPC cannot make all of the grades needed in the market. The market remains short of material despite the producer’s promises.” Regarding PP injection, some converters were considering substituting HDPE injection for homo-PP injection in their manufacturing process since the new duties pushed PP injection to uncompetitive levels.

While complaints were growing, a hearing was held to discuss the growing PP crisis at the end of August, 90 days after the implementation of the protection fees. During the hearings, the OPC Chairman stressed the need for a policy protecting local industry. “Polypropylene is an emerging industry in the Egyptian market and it can’t compete without any protection,” he underlined. The other local producer EPPC’s Chairman Fikry Yusuf reported that his company was also suffering losses. He demanded that the government protect their company so that they do not suffer the same fate as OPC, which has had to suspend its production.

However, exporting countries criticized the local operators in Egypt, as per ChemOrbis. The Chairman of the General Authority of Kuwait Industry Abdullah Saad said that the local producers expanded their production lines when they were not financially able to do so and this is why they were suffering, not because of PP imports. Oman representative Faysal el Hayrany cited that the local companies were procuring 60% of their feedstock from Libya, and after the Libyan revolution, the country wasn’t able to provide these feedstocks, which led to their crises, noting that it was not the fault of PP imports. As a result of this hearing, Omani PP was exempted from the protection fees as this origin did not exceed 3% of total imports into the country.

Whilst the confusion in the market has continued and players have been unsure of the fate of the protection fees, the new Egyptian Minister of Industry and Foreign Trade Hatem Saleh has decided to cancel the imposition of the protection fees for the year 2012. The decision took effect as of September 12. Following this development, an official source from EPPC reported that their PP plant experienced a sudden malfunction and that they had to reduce their operating rates to 50%. EPPC has decided to suspend its operations temporarily for 3-4 weeks for maintenance. The source added that they are planning to add some equipment to their plant in order to raise their total capacity to 36,000 tons/month.

The source also added that EPPC asked the Minister of Industry to allow PP imports to be brought duty free temporarily until the plant finishes its maintenance. However, this news has not been confirmed by the Ministry and the Ministry’s initial report suggests that the protection fees have been removed permanently for the year 2012. The plastics division of the Chamber of Chemical Industries received the Minister’s decision with great satisfaction. Khaled Abo El Makarem, head of the Chamber of Commerce’s plastic division, said in a statement to local media that the decision was not issued randomly by the Minister, as it was based on the division’s studies and the Egyptian Manufacturers Association’s work showing the extent of the damage to converters and the sector stemming from the protection fees.

Khaled Abo El Makarem also mentioned that the Plastic Division will encourage buyers not to abandon EPPC’s products and added that it will continue to be their priority to purchase domestic products. A distributor commented on the removal of the protection fees by saying, “This was a very good decision and caused relief amongst all buyers.” According to him, PP prices will start to decrease in the upcoming days. A trader told ChemOrbis, “Finally, we heard a rational decision and we are happy with the removal of these fees. However, due to EPPC’s maintenance, which will last until the end of October, locally held prices have risen by a minimum EGP300/ton ($49/ton). Yet, when Saudi Arabian materials enter the market like before, these increases will be brought down.”

A converter reported feeling confused and said, “EPPC will be undergoing a maintenance shutdown for about four weeks and there will be no supplies from them during this period. However, we do not have many stocks as we were refraining from importing due to high protection fees. Now that these fees have been removed, Middle Eastern producers might return to the market with higher prices to take advantage of the absence of EPPC. Even the most recent local prices we received moved up significantly due to EPPC’s maintenance despite the fact that anti-dumping duties were removed.”

A different converter said, “We are happy with the permanent removal of the protection fees and we feel this decision should have been taken long ago considering the fact that EPPC did not live up to their promises to cover the market’s needs for all homo-PP products. A source from EPPC confirmed that they are going to be under maintenance until end October and we see higher local prices due to the current shortage, but when the regular import sources enter the country, prices will soften.”

Will PS market soften in Europe?