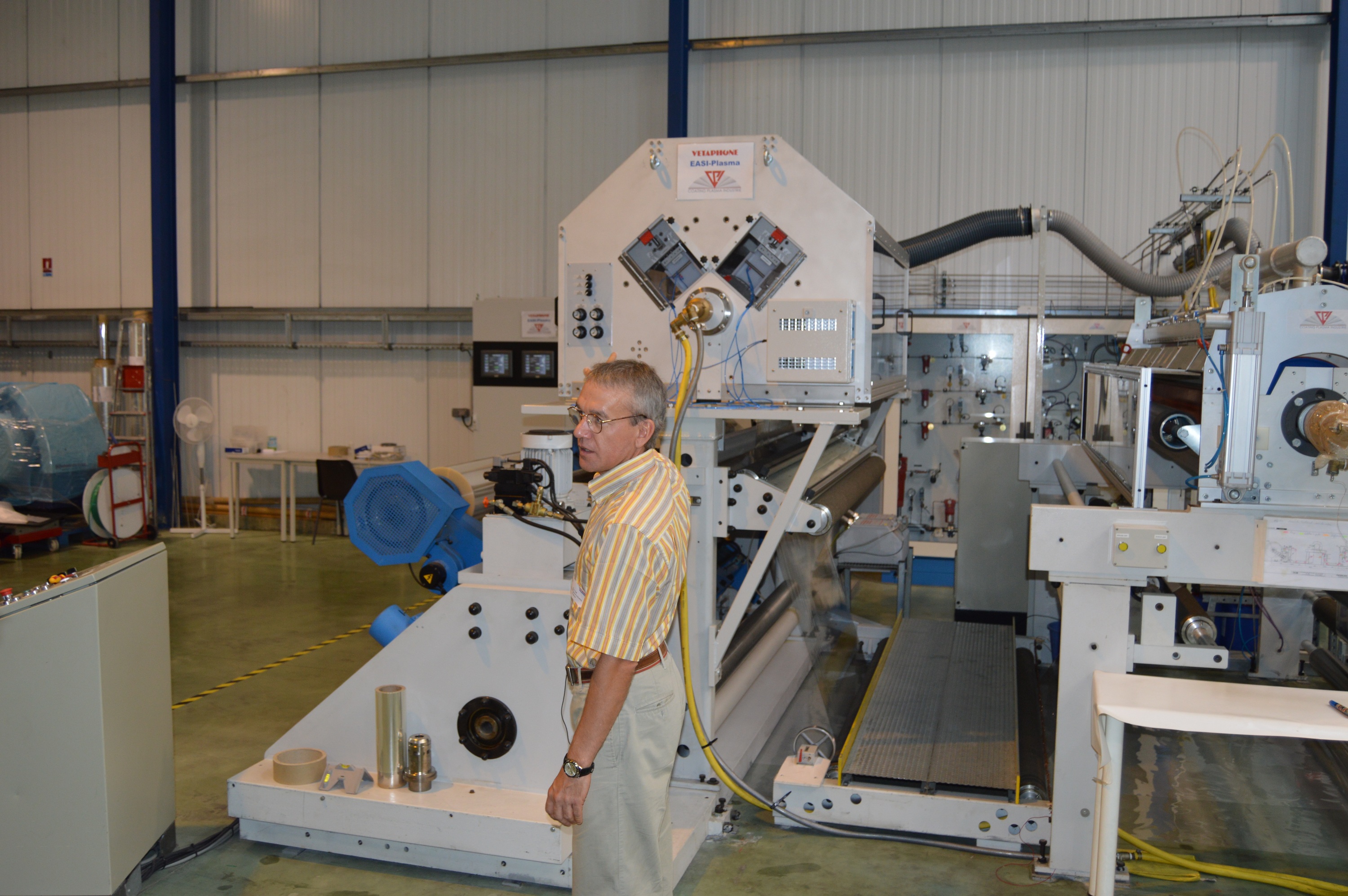 The cooperative partnership between Vetaphone, the Danish pioneers of Corona treatment technology, and Coating Plasma Industrie (CPI), the French leader in surface treatment technology, has created EASI-Plasma, a new product for the coating, laminating and printing industries. Nick Coombes reports from a seminar in Peynier, at which the two companies addressed an audience of substrate manufacturers and converters.

The beginnings of surface treatment
When Verner Eisby developed the electrical Corona discharge treatment concept into commercial reality back in 1951, he solved one of the major problems facing the coating, laminating and printing industries – adherence. The Corona principle still holds, and today is seen in operation on many thousands of production lines worldwide. But, Corona is not the answer to all adherence problems, and with more and different applications being demanded on an increasing number of new substrates, the industry is ready for the next generation of surface treatment technology.

Welcoming delegates to the seminar, Vetaphone’s current CEO and son of the founder, Frank Eisby, stated: “Combiningthe capabilities of two of the industry’s leaders has created a new product that not only extends the scope of surface technology treatment, but brings new commercial opportunities to a wide range of companies that are competing in the global market.”

Stressing the point that EASI-Plasma should not be seen as a replacement for Corona treatment, he went on to say: “While we may predict a small level of business, perhapsthree to five percent, moving from Corona to EASI-Plasma, the major impact of this technology will be in developing new products in new markets.”Explaining how Vetaphone shares R&D with its customers on a ‘royalty free’ basis, and delivers test results under an NDA, he claimed that EASI-Plasma would offer significant new properties and cost savings across a broad spectrum of flexible materials.

The need for new technology
The opportunities and benefits of EASI-Plasma were explained in detail by Bertrand Jaccoud of CPI. He said that the company, which is R&D driven, hasmore than 10 years of practical experience with plasma treatment, working with universities and technical institutes to solve adhesion and coating problems at its production and test facilities in Peynier.

Highlighting the need to run as lean an operation as possible, heexplained how by using EASI-Plasma, the need for and cost of solvents, adhesives and chemical compounds, and technology to cure them, could be eliminated, and by surface treatment, a cheaper substrate can be specified without any loss of quality.“With good atmospheric surface preparation it is possible to use simpler, cheaper ink formulations, and reduce time and waste. You end up with a better product that is innovative and different – and most of all, highly saleable!”

Why EASI-Plasma?
Picking up on the technical aspect of the process, Eric Gat (CPI) explained how the EASI-Plasma grafting works. Essentially it differs from Corona treatment by the inclusion of Nitrogen (for standard grafting), and Nitrogen plus dopant gases (for advanced grafting), which react with the substrate surface.“This gives a long lasting surface modification that has a stable high surface energy. It offers tuneable wettability, which gives better adhesion. It means there is no need for chemical primers, and print quality will be high whether water- or solvent-based or UV-curable inks are used. Adhesion is also improved for extrusion coating, extrusion laminating, metallising, varnishing and lacquering.”

Taking the process one stage further, Eric Gat explained the Nanocoating concept, in which monomers interact on the surface of the substrate causing the formation of an ultra thin coating. This can be organic (Silicone) or inorganic (Silica), and both create a layer only 1 – 10nm thick. “What EASI-Plasma Nanocoating offers is a permanent modification of the surface with a very thin tip layer and a highly cross linked network that reduces the risk of transfer. The Silica version is Hydrophilic with high surface energy, and offers good anti-fogging properties. The Silicone version is Hydrophobic withlow surface energy, and offers tuneable release properties.”

EASI-Plasma at work
To illustrate the principles of these new techniques, several Case Studies were quoted. The first, involved Polymer COEX PP, with a primer, solvent inks and Corona treatment used for food packaging, being switched toUV-flexo inks being used on standard packaging film that had been EASI-Plasma advanced grafted.

A secondshowed how using low cost EASI-Plasma grafting of PET, a standard BOPET film could match the adhesion of a job that previously needed extrusion laminating of hot PE on BOPET multiplexed film. A third Case Study showed how, by turning the process from hydrophobic to hydrophilic, low cost EASI-Plasma advanced grafting of standard PP offers the same adhesion properties with hydrogels for a wound dressing as the existing high cost, low speed use of roll-to-roll vacuum N2 plasma on the PP

Other studies included: EASI-Plasma advanced grafting of Fluor polymer film to allow the use of a more eco-friendly and cheaper glue that offered better anti-stick and anti-stain properties; dealing with the anti-fog properties of printed PP and PE films used in food and greenhouse applications where odour and contamination were persistent problems by using EASI-Plasma anti-fog Silica Nanocoating, which gave the PP and PE films a high surface energy; and finally, an example of how CPI used EASI-Plasma Silicone release to Nanocoat a 1.2m wide PET film and produce a non-contaminating eco-friendly release liner.

Proven technology
Critical to any new product is its commercial viability, and on this subject Ronni Nielsen (Vetaphone) was able to reassure the assembled guests that while EASI-Plasma was a pioneering technique, the mechanical and electrical hardware required to implement the process was already well proven. Explaining how Vetaphone has used its 60 years of expertise in manufacturing equipment, he said: “We are accustomed to working with both OEMs and end users on problem solving, and we see the partnership with CPI and its test facilities here as an extension of the high quality service we offer.”

What is on offer from Vetaphone/CPI is a bespoke service that can be tailored to individual requirements, with an open two-way dialogue throughout. It offers full test and demonstration facilities for web widths from 100mm to 1.2m, on substrates from 3-micron to 5mm in thickness at speeds from 10m/min to more than 600m/min.

Moving onto the production floor, Eric Gat showed a diagram that illustrated how the process worked inside the EASI-Plasma station, pointing out the critical part played by its ability to adjust the gap between the rollers and the electrodes. The Quick Change Cassette, which was originally designed to facilitate cleaning and maintenance, now offers the opportunity to have all processes in one unit. Both Gas Controller and iPLASMA Generator have touchscreen control panels. These offer precise management control of each job, and provide a production log for repeat work and performance assessment, as well as a suggested maintenance schedule.

The way forward
Bringing a focus to the day’s activity, Vetaphone’s Jan Eisby (the founder’s second son) outlined where he sees the future for surface coating. “Corona will still play the major part in the common treatment for label printing, coating, laminating and extrusion. It is simpler and cheaper, and in many cases its performance cannot be bettered. What EASI-Plasma offers is an extended adherence facility with special films, and in Hydrophobic and Hydrophilic applications, and where anti-fog and tuneable release properties are required – Corona cannot do this.”

Listing the range of substrates on which Vetaphone has successfully performed Advanced Grafting and SIOx coating, he explained that on known products, coating layers can be reduced to 10nm – which is 100 times less than conventional layers.This opens a whole new range of product opportunities in new markets, from agriculture and food to hygiene and medical applications. EASI-Plasma will allow food to be packaged in film with an anti-bacterial surface – it will prolong the storage life of the world’s food resources, and offer improved distribution logistics. In agriculture, it will ensure better growing conditions for crops that maximise production and reduce the need for non eco-friendly fertiliser. In medicine, surfaces can be tailored for special cells or bacteria, and EASI-Plasma can produce faster and better diagnostic products.

Reactions
If the product appears too good to be true, perhaps the best yardstick to use for judging the success of the seminar came from the reaction of three brand owners that attended the seminar,each of which, in their own market sectors, could become major users of EASI-Plasma. Unwilling, for confidentiality reasons, to be identified, they included a leading global brand in tissue and toiletry products, a major label converting group, and a major European food packaging manufacturer. All reacted positively, and expressed the desire to know more, pledging to recommend their own R&D units to explore the practical application of EASI-Plasma technology on existing product lines. Consistent performance is crucial to any new technology being adopted in the commercial environment. Time and testing will prove the case for EASI-Plasma according to Vetaphone and CPI.

Coperion K-Tron to Exhibit at K 2013 in Duesseldorf, Germany

Author plasticsinfomart 24
To pay tribute to the emerging Wood-Plastic-Composites (WPC) market in India, battenfeld-cincinnati Austria, Vienna, has now enlarged its presence in this market by establishing...
Read More