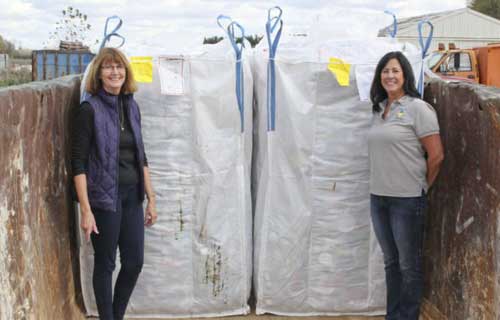 How big is a 500-pound bag of bottle caps collected for recycling?

Taller than the people who filled the bags.

Recyclers from area schools and other sources delivered more than two tons of plastic bottle caps to staff members at the Shelby County Recycling District Friday.

The effort was part of the district’s plastic bench program. Participants in the program collect the caps and bring them to the district workers who then send them off to Green Tree Plastics, Inc. in Evansville to be made into benches.

Some of those benches will be dedicated to members of the Borinstein family who were killed in a small plane crash Aug. 12, while on a flight to Virginia.

The church’s caps will go toward benches at the Salvation Army, the Shelby County Public Library and the nursing home in Waldron, said Ann Warble Haehl, education coordinator for the recycling district.

Carpenter said it takes about 400 pounds of caps to make one bench, and each bench weighs about 185 pounds.

The plastic bench program began in 2014, and the Recycling District has completed about a dozen benches so far. The caps delivered Friday will be taken to the Evansville company Tuesday — America Recycles Day.

Many schools and groups have collected caps to make benches for the Borinstein family, said Betsy Stephen, chair of the citizen advisory committee.
“People are just so excited about that program,” she said.