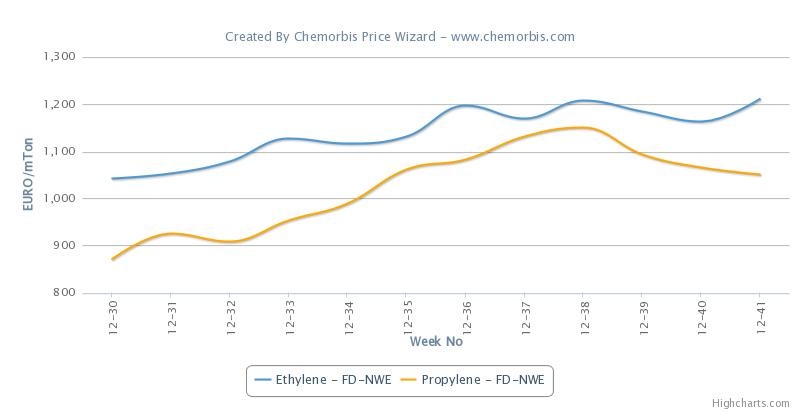 Several crackers have returned from scheduled or unscheduled maintenance shutdowns recently in Europe, a factor which is expected to bring some relief to the ethylene market, where a scarcity of materials pushed prices higher last week, as per the pricing service of ChemOrbis.

However, this development may put extra pressure on spot propylene prices, which have already been on a downward trend since the middle of September. Borealis restarted its Porvoo complex last week following a six week scheduled maintenance shutdown. The complex includes a cracker with 390,000 tons/year of ethylene and 240,000 tons/year of propylene capacity.

According to market sources, all plants were in the restart process last week and were already partly running. Repsol also restarted its 250,000 tons/year cracker in Puertollano, Spain last week after a small fire hit its production in June, as per ChemOrbis. The restart date remained unclear for a long time, although it is now reportedly running at full rates. LyondellBasell was also planning to resume operations at its 735,000 tons/year cracker at Wessling, Germany on October 9. The site was shut in late August for maintenance.

Exxon/Shell’s joint venture cracker at Mossmorran, UK was also slated to restart before October 12 following the shutdown in late August for a scheduled turnaround for six weeks. In addition, Sabic was reported to have resumed operations at its Olefins 4 cracker at Geleen, the Netherlands last week after a brief shutdown at the beginning of October stemming from technical problems. Olefins 4 has an ethylene capacity of around 800,000 tons/year. Accordingly, players believe that the return of these major crackers will ease monomer supplies across Europe. This may make itself felt on the pricing side as well, as per ChemOrbis.

In the spot ethylene market, tight availability was still the major concern pushing prices higher last week regardless of the weak demand from the downstream side. In the spot propylene market, the situation was just the opposite. Poor downstream demand dominated the market and pushed prices lower despite the insufficient supplies. Now that supplies are likely to improve, a further softening is anticipated for spot propylene prices.

Oil hovers near $97 ahead of US crude supply data