A State grant will help officials purchase new equipment for the Armstrong Recycling Center in Rayburn Township and also hopefully revitalize recycling in some local communities.

Newly-promoted Recycling Coordinator Andrew Harvey said the more-than $236,000 grant from the Department of Environmental Protection will go toward much-needed equipment and education. 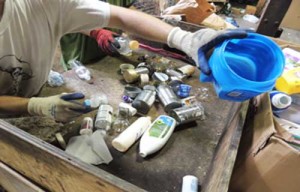 Harvey – who has also been a planning coordinator for the past seven months (responsible for duties such as reviewing subdivisions) – said trailers are currently available in a dozen locations – including Kittanning, Ford City and East Franklin Township (Cowansville).

Program Manager Sally Conklin (the county’s recycling coordinator since 2000 before a Planning and Development staff reconfiguration) said new sites will be added.

“(At the beginning of 2016) we eliminated the circuit rider sites, where a truck went and sat for so many hours, so the first thing we’ll look to do is, wherever a site was eliminated, try to put a trailer there if the municipality is willing to agree to that,” Conklin said. “Those are the sites we’ll target first.

“The goal is to try and have coverage so that all residents have recycling within five miles of their house.”

Recycling trailers used to visit Apollo, Bradys Bend, East Franklin and Mahoning, and were emptied once or twice per week.

A paper shredder – housed at the Progressive Workshop of Armstrong County in Kittanning – was received through a grant via 2013 grant funds. Conklin said the new shredders will allow for more training.

Current horizontal and vertical balers “could be in better condition,” Harvey said. Conklin said the oldest has been used for more than 15 years.

The current truck that hauls trailers has high-mileage.

The center is leased through the Progressive Workshop. Workshop Vice-President of Sales and Production Matt Ardeno said about six trainees and three employees work at the Armsdale location.

“Before we can do that, the commissioners had to sign it (and) it goes back to the State for signature. Once we get the contract, that’s basically our ‘notice to proceed’ and then, at that time, we’ll start purchasing the equipment and doing the bid process,” Conklin said.

Skamai went on to praise Planning and Development staff for acquiring the competitive grant without taxpayer expense.

Ardeno said the center currently receives three cents per pound of recycled plastic and about $100 per ton of cardboard.

“We count on the commodities that come in to pay the bills, the trainees, the employees,” Ardeno said.