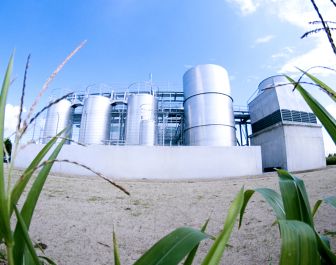 The 28 million euros test project is expected produce up to 1,000 tons of cellulose ethanol from around 4,500 tons of wheat straw based on the sunliquid technology developed by Clariant. In an area encompassing approximately 2,500sqm, all the process steps will be performed that will later be used in an industrial-scale plant. The aim is to confirm the technological feasibility of the sunliquid technique, a biotechnological method that turns plant waste products such as grain straw and corn straw into second-generation cellulose ethanol.

According to its release, studies show that Germany potentially has around 22 million tons of straw that could be used for energy production without compromising essential soil regeneration. This would be sufficient to cover around 25% of Germany’s current gasoline requirements.

Clariant’s CEO Hariolf Kottmann declared, “The inauguration of the new plant marks an important milestone in the production of a climate-friendly biofuel that can also be used as a raw material for the chemical industry.”

Mr Kottmann appealed to politicians and industrialists to draw lessons from the failed start-up of biofuel E10 and to seek open dialogue with all interested parties. “Only when society recognizes the environmental benefits of climate-friendly biofuels can second-generation bioethanol be successful.” He called for stable and reliable framework conditions and an extension of the tax exemption status for second-generation biofuels beyond 2015.

Federal Minister Annette Schavan said at the ceremony, “This plant clearly demonstrates that products traditionally based on petroleum can be manufactured to the same standard using biomass. Thus this new plant serves as an important contribution to a sustainable Bio-Economy.”

As far as Bavarian Minister of Economic Affairs, Martin Zeil, is concerned, there is no better place for the pilot plant than Straubing. “Here at Bavaria’s competence center for renewable raw materials, we don’t just have the raw material straw but above all also the necessary scientific backup in the form of both university and non-university research facilities. If we can make the breakthrough here using the sunliquid technology, it will create a raft of new options in terms of jobs and earnings potential in what is essentially a rural area. And from a global perspective, there’s no ‘food or fuel’ issue when plant waste is recycled.”

The plant at the Bavarian BioCampus in Straubing is logistically located right next to the Donau harbor, and will procure its raw materials largely from the Straubing region. The Mayor of Straubing, Markus Pannermayr, described it as the “most innovative major ‘green chemistry’ company at the Bavarian BioCampus.” He also underlined his willingness to work with District Administrator Alfred Reisinger toward the sustainable provision of biomass for industrial utilization in the context of the “Green Chemistry Belt” strategy for the Danube region.

Professor Andre Koltermann, Head of Clariant’s Biotech & Renewables Center, added, “We have been developing the sunliquid technology since 2006 and have been testing the method on a pilot scale since 2009. The results we obtain in Straubing will enable us to plan industrial production plants efficiently and economically, and ultimately to realize such plants in cooperation with partners.”

Lanxess Mobility Days 2012 kicks off in Shanghai on 6 September