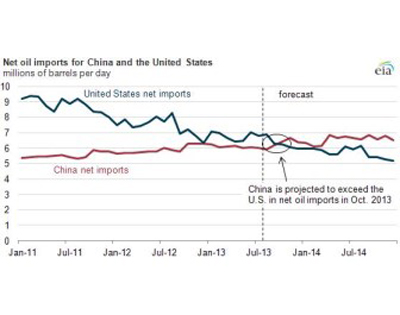 US Energy Information Administration (EIA)’s Short-Term Energy Outlook (STEO) forecasts that China’s net oil imports will exceed those of the US by October 2013 on a monthly basis and by 2014 on an annual basis, making China the largest importer of oil in the world.

The imminent emergence of China as the world’s largest net oil importer has been driven by steady growth in Chinese demand, increased oil production in the United States, and a flat level of demand for oil in the US market, says the Administration.

US total annual oil production is expected to rise by 28% between 2011 and 2014 to nearly 13 million barrels per day, primarily from shale oil, tight oil, and Gulf of Mexico deepwater plays. In the meantime, Chinese production increases at a much lower rate (6% over this period) and is forecast to be just a third of US production in 2014.

Looking beyond 2014, EIA notes that higher US oil production and stagnant or declining US oil consumption, coupled with China’s projected strong oil demand growth and slow oil production growth, suggest that once China replaces the US as the world’s largest net oil importer, the gap between net oil imports in China and the US will grow.

Author plasticsinfomart 123
The buy-sell ideas for polyethylene (PE) and (PP) in China have widened due to diverse views on the potential impact of feedstock costs and...
Read More

Author plasticsinfomart 232
The Coca-Cola Company announced today in the United States the introduction of a new 13.2oz bottle made from 100% recycled plastic material (rPET)*. This...
Read More