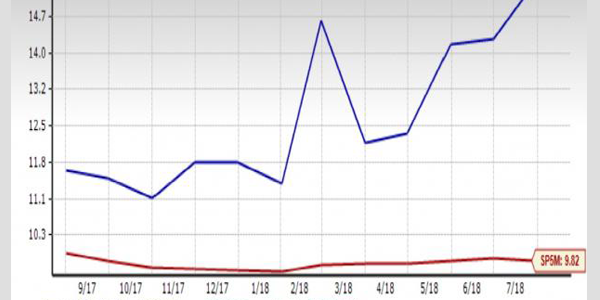 The chemical plastic industry includes manufacturers of polymer materials for a host of end-use markets such as packaging, building & construction, transportation, electronics, containers and aerospace. These products include plastic resins such as polyethylene, polypropylene, polyvinyl chloride (PVC) and polystyrene that are made from raw materials sourced from crude oil and natural gas.

While escalating trade tensions between the United States and China pose as headwinds to the chemical plastic industry, it is poised to gain from an upswing in the global economy and healthy demand from major end-markets such as packaging, building & construction and transportation.

Concerns over a fierce trade war between Washington and Beijing have gripped the markets since March 2018. The United States and China recently levied a 25% tariff on $16 billion worth of each other’s products, ramping up the trade tussle between the world’s two biggest economies. The Trump administration, in July, had imposed tariffs on $34 billion in Chinese goods that led to China retaliating with tariffs on American products of equal value. China’s list of U.S. goods hit with tariffs include chemicals and plastics.

China’s retaliatory tariffs would harm a major market for a range of chemicals and plastics produced in the United States. Chemical industry groups have raised concerns that the tariffs would hurt U.S. plastics exports and the competitiveness of the domestic chemical plastic industry.

Notwithstanding trade-related worries, prospects of the chemical plastic industry look encouraging over the near term. In particular, the U.S. plastic industry is set for strong growth. The American Chemistry Council (“ACC”), a leading industry trade group, envisions U.S. plastic resins production to grow at the fastest pace this year since 2012 as new capacity comes onstream and demand firms for domestic and overseas customers.

The American chemical plastic industry continues to enjoy the advantage of access to abundant and cheap ethane feedstock extracted from shale gas. The shale bounty has provided U.S. plastic producers a compelling cost advantage over their global counterparts, which use oil-based feedstock such as naptha.

This is driving investment in plastic production projects in the U.S. Gulf Coast to beef up capacity. The shale boom has incentivized a number of companies to plough billions of dollars for setting up facilities (crackers) in the United States to produce key feedstocks like ethylene and propylene in a cost-effective way.

Over the short haul, broader economic growth, higher industrial activities and growing consumer spending are expected to support demand for major plastic products including polyethylene and PVC across key markets. Demand for polyethylene — the most widely consumed polymer globally — remains strong in the packaging market for applications in films, bags, bottles and other packaging materials, thanks to growing usage in food and consumer packaging.

Moreover, building and construction is a significant market for PVC (usages include piping, flooring, roofing and windows frames) and the favorable overall outlook for the housing market augurs well for this major plastic product.

The companies in this space should also continue gaining from strategic measures, including cost-cutting and productivity improvement, earnings-accretive acquisitions and price increase actions in the wake of raw material cost inflation. These actions should spur industry-wide margin improvement. President Trump’s business-friendly tax reform would also remain a tailwind. The tax reform should favorably impact the bottom line and cash flows of U.S. chemical plastic companies.

The Zacks Chemicals Plastics industry, which is a 9-stock group within the broader Zacks Basic Materials Sector, has outperformed both the S&P 500 and its own sector over the past year.

While the stocks in this industry have collectively surged 26.8%, the Zacks S&P 500 Composite and Zacks Basic Materials Sector have gained 18.2% and 5.3%, respectively.

The outperformance has been driven by a rally in the stocks of U.S. plastic makers. While the ongoing trade war has threatened the industry, American plastic makers are gaining from their cost-advantaged position, strong end-market demand as well as organic and inorganic growth measures.

Stocks in the Industry Trading Cheap

The EV/EBITDA multiple is a preferred measure for valuating cyclical industries like chemicals that have significant fluctuations in earnings from one quarter to the next. Notably, the value of commodity companies is dependent on the movements of the prices of commodities and growth in the underlying industry/economy, both of which typically move in cycles.

Going by this multiple, valuation for the Zacks Chemicals Plastics industry looks cheap at the moment when compared to the broader market and its own sector.