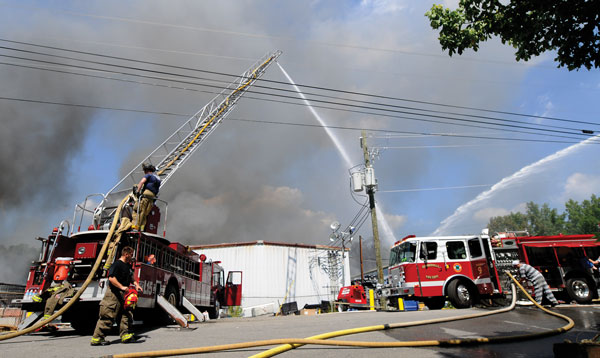 “I just don’t think people realize how serious this is and could have been,” said state Rep. Barbara Massey Reece on Saturday night.

Reece was carrying cold drinks and fruit to firefighters from all across Northwest Georgia at the scene of a recycling mill fire at the former Harriet-Henderson Mill southwest of Summerville on Saturday afternoon.

The blaze initially broke out between 4 and 4:30 p.m. Friday afternoon. By the time first responders could get to the scene, the blaze was well out of control, and before the night was over, crews from more than 50 different agencies in Northwest Georgia and Southeast Tennessee had responded to contain the flames.

Officials felt they had the blaze contained early Saturday morning, and many of the out-of-town agencies had departed when the blaze re-erupted as emergency responders were conducting an incident report meeting around 8 a.m. Saturday.

“We just weren’t prepared to go at it again,” Chattooga County Commissioner Jason Winters said. “The guys were tired, we didn’t have all of the equipment back on site, and it really turned into a pretty intense fire again.”

“It was just an incredible fire but an incredible response,” Winters said. “If it hadn’t been for the folks that came in to help it could have turned into a very dangerous situation. Our guys are always very well suited to respond, but this was a very large fire.”

Chattooga County Emergency Management Agency Director Eddie Henderson could not speculate how much plastic had been destroyed, but he estimated that bales were stacked three-quarters of the way up the warehouse walls. “When it got started, it just went. There wasn’t a whole lot you could do,” Henderson said.

The mill was exclusively stocked with bales of recycled plastics.

A quarter-mile area around the plant was evacuated Friday evening, but none of those properties sustained fire damage.

One firefighter sustained rib injuries Friday when a hose recoiled into his chest after it was pressurized, while a number of firefighters had to be treated for heat exhaustion. None required hospitalization.

itoring stations in the area to monitor for any toxic material that might have ignited. “We were very lucky that we didn’t see a high particulate matter of any material,” Winters said.

The mill along Raccoon Creek was originally constructed in the early 1880s as Raccoon Manufacturing. The mill suffered a variety of financial problems and had closed by 1906.

John Berry, saw the deserted mill around 1909 and decided it would be a perfect location to spin yarn for cotton to serve his Rome Hosiery Mill (where the Rome News-Tribune now sits) and other manufacturers. He re-opened the mill late in 1910, and the community took on the name Berryton.

The Textile Workers Union of America organized the plant in 1949 and two years later, the mill, and community, were paralyzed by an ugly strike, which resulted in the death of one non-striking woman worker. More than 90 people were arrested during the raucous picketing.

The Berry family sold the mill seven years later to Henderson Cotton Mills out of North Carolina. It was operated at Harriet-Henderson Mill until it closed in the year 2000.

North Georgia Textile purchased the mill in 2003 and converted it into a major recycling center.

Henderson said that late Saturday night crews were continuing to extinguish hot spots, which might better be referred to as melt spots, using excavators and firefighting apparatus.

“The big equipment goes in there, it grabs a bite of that plastic, pulls it to the outside, and the firefighters extinguish it,” Henderson said. “This could take 48 hours; it could take three or four days to do. We’re working with the EPA to do that.”

Author plasticsinfomart 154
Meech International is set to use CHINAPLAS as a launching pad for its brand new static elimination bars, the Hyperion 971IPS and Hyperion 929IPS,...
Read More

Wittmann aiming to double capacity in wake of automation boom

BASF to increase global capacities for butanediol and PolyTHF

Author plasticsinfomart 186
New special show devoted to Industry 4.0 interpack 2017 has recorded the biggest exhibitor demand in its over 55- year history. By the official...
Read More