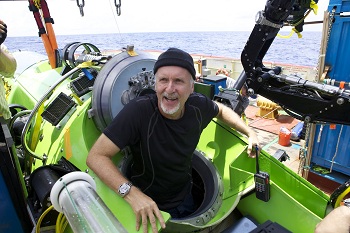 Prepregs produced by Umeco Structural Materials (Warwickshire, UK) have found their way to the deepest point in the ocean onboard the Deepsea Challenger, a record-breaking submersible which completed a solo dive to the depths of the Mariana Trench on the March 26, 2012, piloted by filmmaker James Cameron in a joint scientific project with the National Geographic Society and Rolex to conduct deep-ocean research and exploration.

The prepregs were used by Australian composites parts manufacturer LSM Advanced Composites (LSM; Toowoomba, Queensland). LSM was approached by the submersible’s design and build team, Acheron Project Pty Ltd. (Leichhardt, NSW, Australia), and Design + Industry (Balmain, NSW, Australia) to manufacture the carbon fiber internal lining of the Pilot Sphere, the pilot’s home in the submersible. This “home,” which measures 43 inches in diameter, is filled with electronics and life-support equipment. It is so small that the pilot’s legs are tightly bent and he can barely move his arms. In comparison, the overall length of the Deepsea Challenger is similar to that of a stretched limousine.

Umeco’s prepregs, sourced to a tight delivery schedule through Umeco’s Australian agent Lavender CE Pty Ltd. (Acacia Ridge, Queensland), were chosen because of the company’s ability to supply specialized prepregs on tight lead-times—regardless of geographical location. Customized, FAA-approved civil aircraft interiors prepregs were chosen because of their low fire/smoke/toxicity and low heat-release characteristics, a requirement which formed part of the designer’s safety specification.

Lavender supplied more than just prepreg. They assisted LSM in their tooling design and developed the flat patterns of the component plies for CNC cutting using their in-house 3D laminate software. This is one of Lavender’s key services to their customers.

This craft was piloted by Cameron in his voyage down to the Mariana Trench, in the western Pacific Ocean near the Philippines. The voyage, the first of its kind in over 50 years, and ensuing scientific sample analysis will give mankind a better understanding of the least-explored environment on Earth. Following this successful venture into the darkest depths of the ocea, at 6.8 miles, Umeco can state categorically that its material has been “where no prepreg has gone before.” —mpweditorial@ubm.com