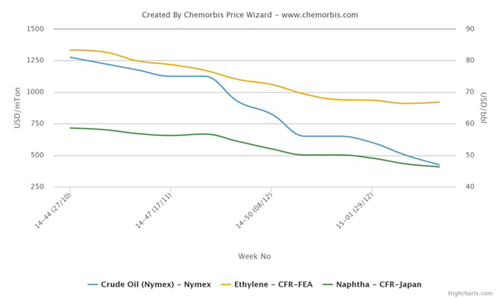 According to ChemOrbis, buyers and sellers in Asia’s PVC markets are holding divergent expectations regarding the direction of the market as sellers argue that the market is nearing the bottom while buyers counter that the market should have further room to decrease. Sellers base their hopes of stabilization on the fact that some major producers claim to be feeling free of inventory pressure while buyers argue that talk of market stabilization is not realistic given the ongoing declines in the upstream chain.

According to data from ChemOrbis Price Wizard, spot naphtha prices on a CFR Japan basis have come down by around $200/ton since the beginning of December while spot ethylene prices on a CFR Northeast Asia basis declined by approximately $180/ton over the same time frame. Crude oil futures on the NYMEX, meanwhile, have fallen from over $65/barrel at the start of January to around $45/barrel this week.

On the other hand, sellers argue that the market is near the trough and does not have much further room to decline as availability will be a limited next month. Stock levels in India are said to be a bit tight following a period of reduced purchasing activity while some sellers claim that American and Chinese exporters will be less active in the coming weeks owing to better netbacks in their domestic markets. Conventional PVC producers in China have been able to maintain their domestic prices for the past few weeks owing to their strong competitiveness against acetylene based PVC producers. A distributor who concluded for acetylene based PVC in China’s domestic market commented, “Acetylene based PVC producers are lowering their prices to regain competitiveness relative to conventional PVC, but we hear that most producers are operating at loss at the current prices”

An agent of a Taiwanese producer commented, “Our supplier is hoping to achieve either rollovers or modest increases for the coming month as they will have a smaller than usual allocation and are therefore feeling free from sales pressure. On the other hand, crude oil prices have posted fresh declines since the New Year holidays and we believe that lower costs will encourage buyers to show resistance to any attempt at stabilizing the market.”

A trader based in India stated, “We have heard that a Taiwanese producer may attempt some increases for next month, but we believe that buyers will not accept any increases as domestic prices are competitive relative to the prevailing import prices while converters will also expect to see some price reductions based on the ongoing losses in upstream markets.”