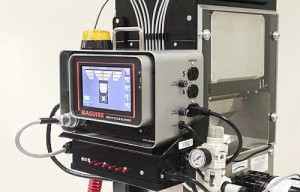 A new-generation controller for what’s reported to be the world’s most widely used gravimetric blender has far greater data processing capability than the previous controller, substantially enhancing communications with other devices in an Industry 4.0 setting and offering centralized control of both blending and loading. So states Maguire Products Inc.., Aston, Pa., which will introduce the controller at K2016.

While being backward-compatible with earlier control systems, the new Maguire 4088 controller is said to operate at seven times the speed of the Maguire 1212 controller, eight times the memory, and 45 times the resolution of the load cells used to weigh batch ingredients. Options for operators include a keypad /digital thumbwheel interface or a new touchscreen that is removable for remote operation, features intuitive graphical displays, and is available in multiple languages. Standard with the touchscreen is built-in software for a conveying system for loading multiple materials into a blender and metering the combined materials into a processing machine.

“While the batch accuracy of the Maguire blender will continue to be rated at the exceedingly small range of ± 0.1%, the vastly enhanced operation of the new 4088 controller will increase the volume, speed, and reliability of data transfer,” said Frank Kavanagh, v.p. sales. “This means that valuable information on the makeup and consumption of the raw materials being metered into the molding or extrusion process can be readily shared with third-party devices via any standard communication protocol, making it possible to integrate Maguire blenders with today’s most advanced technologies.”

The increased capacity of the 4088 controller and the new design of its software provide faster readings and more storage and make it easier to track down problems and make changes, noted Kavanagh. “The unit is constructed so that system timing is no longer affected by variations in electrical power,” he said, “and wiring and connectors are designed to make repairs and parts replacement easier.”

In comparison with the Maguire 1212 controller, data processing in the new system is increased from 16- to 32-bit; speed from 16 to 120 MHz; and memory space from 12 KB to 96 KB. Flash memory now is rated at 512 KB internal and 8MB external; random access memory, at 96 KB internal and 32 MB external. The increased memory makes possible more storage for data logs and the ability to handle larger communication buffers.

The Maguire 4088 controller is compatible with previous Maguire controllers, and like all Maguire systems comes with a five-year warranty. Updates to production software for the controller are free for the life of the blender.

The removable touchscreen interface available with the new 4088 controller provides a graphical interface on each screen with readily recognizable icons for every blender module, eliminating dropdown menus in favor of direct, touch-activated access to the module requiring adjustment. The blender modules represented by touchscreen graphics include the various hoppers for resin, regrind, colorants, and additives; the weigh chamber; and the mixing chamber. There is similarly extensive graphical representation of the various modules of a loading system, such as pumps and receivers.

“While the controllers for blenders operated by PLCs function literally as remote devices, with a short but perceptible lag between input and response, our touchscreen is actually the display of an onboard computer, and its response is lightning-fast,” Kavanagh said.