The Delhi-based Alok, one of the leading manufacturers of masterbatches (a key raw material for making plastic products), is eyeing to tap the growing light emitting diodes (LED) industry with its innovative products that help reduce the harmful effect of this energy-efficient lighting source on eyes.

While the benefits of LED – such as being energy efficient and low greenhouse gas emitter – are well-known, researchers across the world point out to the health damage, especially the retinal damage, caused by LEDs. A recent study revealed that exposure to LED lights can cause irreparable harm to the human eye – specifically the retina – because the light emitted from an LED lamp can be too harsh and bright, if there is no protective shield. As per research studies, 90 percent of the LED lamps available in India do not have protective filters/screens. 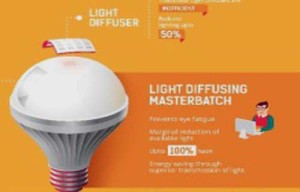 To overcome this problem, Alok Masterbatches developed a light diffusing (LD) technology by adding a plastic filter in front of the LED fixture. At present, LDA masterbatches are imported and, therefore, have a high price point. By developing LDA masterbatch indigenously, Alok aims to bring down the cost of LED products and increase access to safe LED lights in the country.

“LDA is an outcome of our Alok Technology Incubation Centre (ATIC) in collaboration with CIPET. We are producing LDA masterbatches for commercial purpose,” informed Vikram Bhadauria, director, Alok Masterbatches.

Light diffusing masterbatch (LDM) works on the concept of diffusing harsh light into a softer form, without sacrificing the lumen intensity of the LED. Unlike traditional light diffusers, which drop the intensity of light, LDM does not make the light appear dim instead of diffused. More importantly, it does not cause any damage to the eyes.

With the government encouraging the use of LED lamps, the demand for LED has seen a quantum jump in the country. The government has adopted the Domestic Efficient Lighting Programme (DELP), through which it aims to save 20 gigawatts by replacing incandescent bulbs with 770 million LED lamps by 2018.

This burgeoning market has opened up a huge opportunity for Alok to promote its import-substitute LDA masterbatch, marketed under LumaNex brand, which can help in production of safe LED lights. “Under DELP, the government wants to replace all the 77 crore incandescent bulbs sold in India with LED bulbs; this has opened big avenue for the lighting industry. Manufacturers of LED lights are looking to cash in on the opportunity arising out of the new government’s initiative to push usage of the energy saving bulbs and they expect the sector to touch a size of Rs 20,000 crore by 2020. Local manufacturing of safe LED lights using LDA masterbatches would not only be cost efficient, but will also reflect progress on the ‘Make in India’ initiative,” opined Bhadauria.

In order increase the acceptance for its LDA masterbatch, Alok is working closely with the LED manufacturers to put in place standards and specification. “We are working with the LED industry to standardise the product specifications and to incorporate them into the recent BIS standards for the LED lights. The manufacture of this product requires a very unique production and testing infrastructure. We plan to rapidly upscale the same as consumer awareness increases and standardisation of the LED ecosystem takes place,” said Vikram Bhadauria.