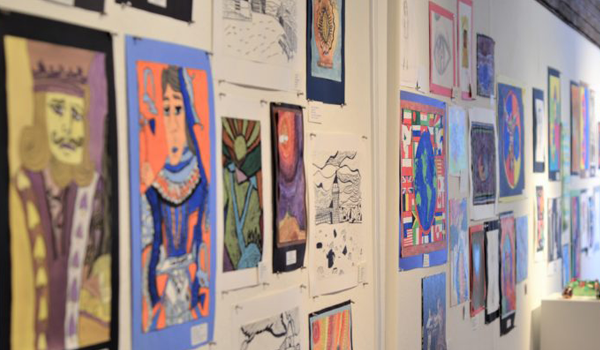 The show — a tradition that draws artists to Hallowell from all over the state — will remain on view through June 2 at the gallery.

Prizes were awarded at an opening reception Wednesday, May 9.

Best in Show and a $500 cash prize sponsored by The Kennebec Valley Art Association was awarded to Ian Trask of Topsham for his mixed media assemblage entitled “Parlay.”

“Ian’s use of a multitude of layers in both idea and materials is truly intriguing,” wrote show juror Bethany Engstrom — a curator, artist and educator living in Belfast — wrote. “The reuse and layering of found materials draws the viewer in to create these strange narratives along with their own.”

Second place, with a $250 cash prize sponsored by McKee Law was awarded to Patrick Stavens of Portland for his piece titled “Linked,” made with acrylic paint, molding paste and plastic on foam.

“Patrick’s handling of materials is deceptively suggestive, and creates an instant engagement with those materials,” said Engstrom. “It takes a moment to realize what you are seeing, and then you look more.”

Juror’s Choice Prize, and a $200 cash prize sponsored by the Stevens Commons was awarded to Julie K. Gray of Saco for her piece entitled “EVP Recording Equipment” made from papier-mache, acrylic, plastic, ribbon and yarn.

“There is a playfulness in Julie’s work that evokes humor and nostalgia but there is also that moment when looking at them that makes you question the memories and thoughts that they bring up,” wrote Engstrom. “Sometimes good and, sometimes, maybe not.”

Third place, with a $100 cash prize sponsored by G&E Roofing was awarded to Matt Demers of Gardiner for his mixed media painting entitled “See Me.”

“The energy expressed in the marks made by Matt, combined with the collaged elements lead to an exciting story, one that eludes and questions time and draws you in closer,” said Engstrom.

 James Chute of Freeport for his piece “180120,” which is made with black gesso with traces of red acrylic on incised wood panel.

“With the flatness or the surface and the placement of the incised lines,” Engstrom wrote, “James’s work creates a space for contemplation and, as with the title, presents a multitude of questions for the viewer.”

“The merging of new and older technology in Andrew’s work, layered with an animation that engages your imagination,” said Engstrom, “activates the viewer and allows you to participate with the work fully.”

“In Nancy’s work, the title says it all!” wrote Engstrom. “There are many, many narratives that are provoked by this pink chair in the woods on a stormy day.”