A new report from the Manufacturers Alliance for Productivity and Innovation (MAPI; Arlington, VA) foundation indicates that despite the economic slowdown in the industrial sector over the past year, the incidence of actual and planned automation investment is very high in American manufacturing. 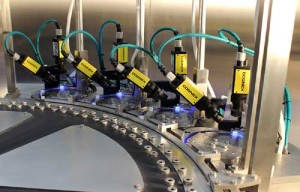 A snapshot of automation investment in U.S. manufacturing

The report is based on a national survey of U.S. manufacturers and non-U.S. manufacturers with a presence in this country and is the second in a series of studies on productivity that the MAPI Foundation produced year. The survey was written by Cliff Waldman, Director of Economic Studies at the MAPI Foundation, and sponsored by Rockwell Automation.

The survey found that widespread automation investment “suggests a fundamental reshaping of the production landscape that could eventually have implications for most aspects of manufacturing activity,” with 83% of respondents to a December 2015 national survey having automated some part of their manufacturing process in the five years prior to the survey and 76% indicating that they plan to do so in the three years following the survey.

A few of the drivers of this increased implementation of automation are increased global manufacturing integration which is putting pressure on U.S. manufacturing companies for reduced costs and higher quality. “The survey reveals that the two most common criteria used by U.S. manufacturers for evaluating the performance of new automation technologies are whether they lower total production costs and whether they improve quality,” said the report’s summary.

Supply chain pressures are also a motivating factor for manufacturers to implement automation technology. “Among the top drivers of automation investment by U.S. manufacturing companies are use by competitors (43%), use and customers (40%) and use by suppliers (37%),” said the report. Two other factors rounding out the top five are “credible evidence of impact on product quality” (39%) and credible evidence of impact on workforce productivity” (38%).

The mold manufacturing industry saw this struggle with the introduction of high-speed machining (HSM) equipment. Training employees on the new equipment—much of it automated after a bit of programming—often took time away from the production floor. Many times the employees who were introduced to the HSM, the robotic palletizing systems for the electrodes and the operation of a 3-machine work cell, were unable to optimize the new, faster equipment.

Plastic processing operations that implement more than pick-and-place robots also struggle with getting employees accustomed to the high-speed, high volume molding with automated inserting of components, automated vision systems and conveyor operations. Systems for technology such as in-mold labeling and decorating in multi-cavity molds can also be tough to implement when employees are not used to the automation.

“As the survey shows, labor force issues are among the potential impediments,” said the survey’s summary. “Human capital challenges, including the difficulty of finding and retaining computer-literate production works, certainly show themselves to be a cost of automation if nothing else because they slow the full implementation of automation capital into the goods-producing process. But given the overwhelming incidence of automation investment, both planned and actual, in our national survey of manufacturing companies that span a wide range of company sizes and industries, it seems clear that cost and performance pressures are by and large trumping workforce and other internal impediments in the automation decision function.”

Still, recent reports from the Robotics Industry Assoc. (Ann Arbor, MI) show that the North America robotics market set new records in the first quarter of 2016. A total of 7,406 robots valued at approximately $402 million were ordered from North American companies during the first quarter of 2016. The number of units ordered in the first three months of 2016 is a new record among opening quarters, growing seven percent over the same period in 2015.

The survey strongly suggests that companies seriously consider investing in automation in order to be competitive. “If smaller companies that are holding out on automation investment because of cost considerations continue to do so, they will be at a competitive disadvantage in any supply chain that affects their current or future profitability,” said the survey summary.