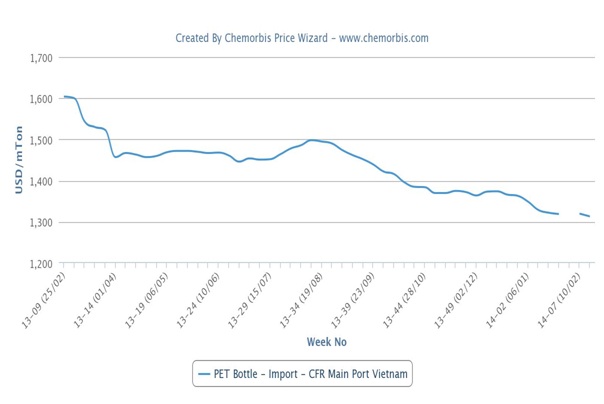 The Vietnamese PET market hit a year low in terms of both local and import prices as per the pricing service of ChemOrbis. Decreasing feedstock costs and weaker Chinese market, which returned from the Chinese New Year holiday on a softer note, reflected on the Vietnamese market.

According to ChemOrbis Price Indexes, import prices in Vietnam lost ground gradually over a year’s time. When comparing the average import PET price in the third week of February 2014 with the third week of 2013, current prices stand around $320/ton lower. Similarly, Vietnam’s current average local PET price is around $290/ton lower than the levels reported a year ago.

A bottle converter operating in Vietnam commented, “We only concluded purchases for small amounts of materials from a distributor at stable levels from last week. We see that the market is on a downward trend and therefore, we do not want to make purchases in large volumes.”

A trader who purchased some import cargoes noted that they bought the materials at lower levels when compared with the previous week. “Meanwhile, we adjusted down our local market prices as the PET market is spiraling down. However, we think that prices may reach bottom levels soon since oil prices are firm, above $100/barrel,” he further commented.

Another trader also commented, “We received a good number of inquiries from buyers and we tie this situation to the approaching high season. Import Chinese offers given to Vietnam are on a softening trend but they are still not deemed as competitive given the high customs duties they are subject to, at 5%.”

According to ChemOrbis, a different trader offering Chinese PET to Vietnam remarked, “We monitor the market at the moment. We hold sufficient stocks but we are not in a rush to conclude deals as prices are losing ground on a weekly basis and therefore, we do not feel optimistic about the market direction over the near term. China is holding ample stocks and feedstock costs are decreasing. This creates a downward pressure on prices. Yet, we try to keep in touch with our regular customers and we are hoping for a rebound soon.”