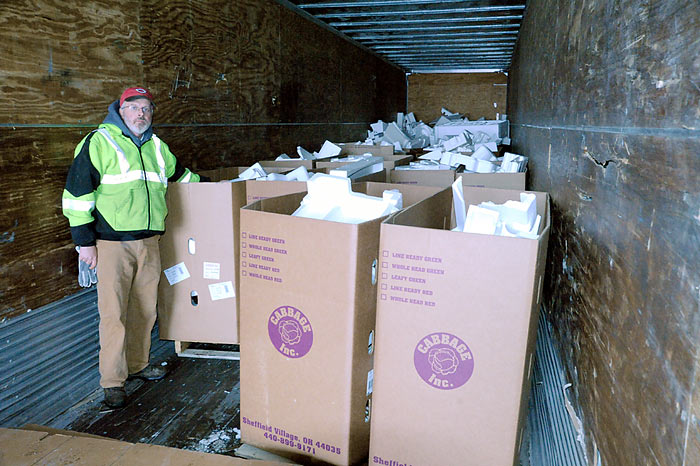 The week after Christmas is the busiest time of year for many garbage collectors and recycling centers.Recycling Centers Busy After Christmas Jeannie Courington, director of the Albertville-Boaz Recycling Center, said it is better to have tons of materials to recycle, than to have nothing to process.

“Wednesday when we walked in we were overwhelmed with the amount of cardboard and wrapping paper we found at the facility so it’s just been a great great week,” she said. Courington said Americans use about 90 billion pounds of paper products every year for packaging, wrapping, and decorating. Wrapping paper is about 8 billion pounds alone.

“That’s a lot of paper that we are trying to keep out of the landfills by recycling, so I appreciate the fact that people are doing this,” she said. The Albertville-Boaz Recycling Center is a volunteer center, and Courington said it is exciting to see more and more people going green. “To know that these people are going out of their way to drop stuff by here, that makes me realize that hey, maybe we are making a difference and getting the word out that we are trying to make the world a better place to live,” Courington said.

Another factor in the increase of items dropped off is likely people have more to bring. “It appears there was a lot of gift giving this year, and a lot of big gifts. We have a lot of television boxes and a lot of big electronic items so you can tell that maybe the economy is about to turn around,” Courington said.

She said another indicator of the country’s financial recovery is buyers are willing to pay higher prices for the used cardboard, paper, plastic, and other renewable materials.

“The more I can make off of the sale of the products, then the better equipment and updated stuff that I can keep going and keep this facility being the grand place that it is.”

The recycling center also has an area for people to leave their Christmas trees.

The city will then mulch the trees and use them for flower beds.

“People discard the trees out on the side of the road after they’re done as everybody’s ready to get them down and get them out of the way, but it’s hard for all the brush trucks to get around to everybody,” Courington said.

Author plasticsinfomart 126
Some of Saratoga County’s construction equipment will be left exposed to the elements this winter. Public Works Commissioner Joe Ritchey went before the county...
Read More

How Healthcare Plastic Can Be Part Of The Circular Economy

Author plasticsinfomart 91
Nestlé is looking to make 95% of its packaging in the UK and Ireland recyclable in the next five years, up from 90% today,...
Read More