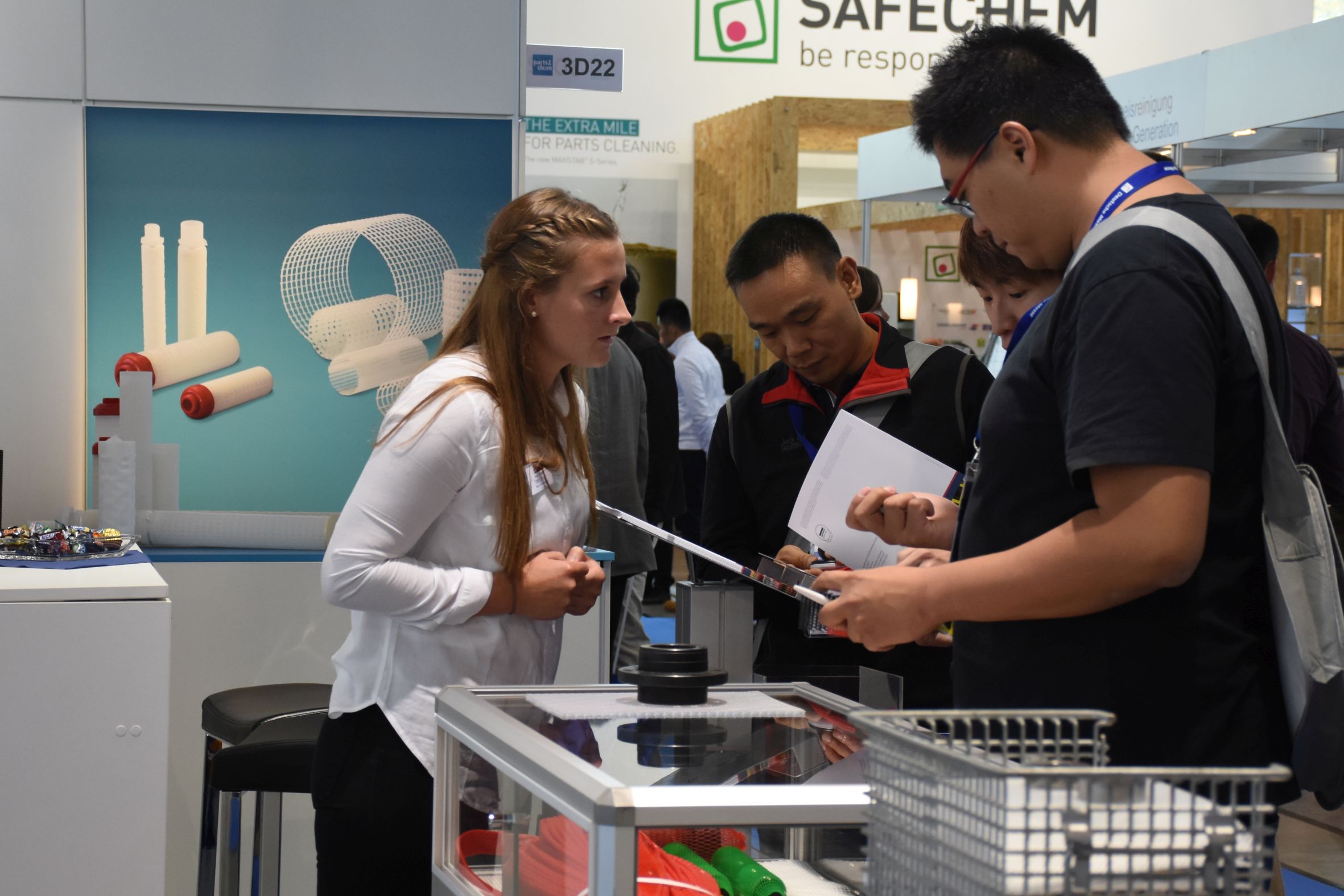 Hannover. The 15th edition of the parts2clean show for industrial parts and surface cleaning was the biggest in its history, and also ranked among the best in terms of attendance. Held in Stuttgart, Germany, from 24 to 26 October, parts2clean 2017 featured 253 exhibitors from 16 nations. Its displays filled more than 7,300 square meters (78,500 sq. ft.) of space, making it the biggest parts2clean ever in terms of booked space. The end-of-show tally shows that parts2clean 2017 was also a major success in terms of attendance: Over its three-day run, parts2clean attracted some 4,900 trade visitors, i.e. nearly 20% more than for the comparable show in 2015. “These outstanding figures reflect the key importance of parts2clean for the industrial parts and surface cleaning industry,” commented Olaf Daebler, Global Director for parts2clean at Deutsche Messe. “Something of at least equal importance was the dynamic, upbeat mood that prevailed throughout the show,” he added.

The visitors came from a total of 41 countries and the share of attendees from abroad was 24% – an increase of 4 percentage points. After Germany, the top countries of visitor origin were Switzerland (16%) and Austria (12%), followed by France, Sweden and the Netherlands with 6% each. This broad international mix was reflected in the diversity of the contacts fielded by exhibitors. Here, for example, is what Detlef Lang, Technical Sales Optical Microscopy, Carl Zeiss Microscopy GmbH, said: “We encountered a lot of international visitors – people from countries like France, Austria, Hungary, Slovenia and Turkey. Most of them were here primarily in order to gather information, but there were also some with specific projects in mind who requested quotes right then and there.” About a third of the visitors from abroad opted to spend two to three days at the show.

The facts and figures only tell half of the story, the other half being the high level of exhibitor satisfaction generated by parts2clean’s top-notch audience. 26% of all attendees were top-level executives, and another 27% were from managerial backgrounds. Moreover, a very pleasing 87% of the visitors were professionals who play a major role in their organizations’ purchasing decisions. “81% of all parts2clean visitors come ready to invest,” Daebler noted. “And about 80% of their planned expenditures are pegged for realization within 12 months of the end of the show. Furthermore, about half of the planned purchases are for volumes in excess of 100,000 euros.”

For many exhibitors, this highly investment-ready audience translated into firm purchase orders signed right on site. Weber Ultrasonics AG is a case in point: “We presented our new ultrasound generator at parts2clean and attracted a great deal of interest on the part of customers and new prospects, alike,” explains Sales Director Florian Weber. “As a result, we were able to bring two projects to a successful close right here at the show.” Another company to successfully shake hands at parts2clean was acp – advanced clean production GmbH. CEO Hans-Jörg Wössner explains: “Throughout the three days of the show we found ourselves in constant dialogue with parties interested in implementing CO2 snow cleaning as an integral process in their production and assembly lines, thus testifying to the steady rise of this technology as an enabler for Industry 4.0. As a result, we generated a lot of high-caliber leads and fielded a lot of promising inquiries. Not only that, we also managed to sell a manual, turnkey cleaning system.” Alberto Tromponi, President of Italian parts cleaning firm Cemastir Lavametalli srl, was likewise very happy with the outcome of the show. “We’ve been exhibiting at parts2clean regularly for several years, and this year the show was excellent for us. We will definitely be back next year,” he said. Joe. A. Kennedy, Vice President of UK firm Andritz Powerlase Ltd, has also already decided to exhibit at the next show: “This was our first time exhibiting at parts2clean, so, needless to say, we wanted our showcase to be a success. Well, I’m pleased to say our expectations were met in every respect. The show was professionally run and very well organized, and we made a number of valuable contacts; so, yes, we will be exhibiting again in 2018.” In a similarly positive vein, Rainer Straub, Director Sales, Ecoclean GmbH (previously Dürr Ecoclean) had this to say: “We used this year’s parts2clean to appear under our new Ecoclean Group brand while at the same time demonstrating to visitors that they can expect the same professionals, the same technology and the same great quality they have come to know and value. The response was tremendous,. Practically every visitor at our stand was there with specific particulate or film decontamination projects in mind.”

Virtually every conversation transitioned rapidly to in-depth, detailed business dialogue, due in large measure to the fact that an impressively high 99% of the show’s visitors were industry professionals. That’s the message from the exhibitors, including Heiko Barth, European OEM Manager at Houghton Deutschland GmbH: “We got talking with many highly promising prospects who had come to us in search of solutions to the real-world challenges they are facing. They were from a very wide range of industries and countries, and the talks we had with them were a goldmine of information. What’s more, all the big-name cleaning plant manufacturers are represented here, so for us as manufacturers of cleaning media, there were plenty of opportunities to initiate and grow key relationships.” The U.S.-based chemicals supplier Kyzen shares this positive impression of parts2clean’s value as a networking platform. Its Chief Product Line Manager Industrial, Chuck Sexton, explains: “We’ve been exhibiting at parts2clean for 10 years. It’s the No. 1 event on our tradeshow calendar, and it always delivers. We always manage to meet up with customers and prospects from around the world, and we value the opportunity to network and discuss specific projects face-to-face with our European cleaning plant partners.”

This year’s international parts2clean trade fair for industrial parts and surface cleaning was attended by company representatives from a very diverse range of industries. The top industries of origin were mechanical engineering, chemical and process engineering, and surface finishing. The automotive industry also had a strong showing, holding steady at 32% of the total trade visitor turnout. 53% of the visitors surveyed feel that parts cleaning – and hence parts2clean as an information and procurement platform – is going to become increasingly important in their industries. This conviction was voiced by as many as 6% more attendees than at the previous parts2clean.

The growing importance of parts cleaning is not confined to the German-speaking world – a fact evident, among other things, in the strong interest among international visitors in the show’s English-language Guided Tours and in the simultaneously translated (German<>English) presentations at the parts2clean forum.

2017 marks the 70th anniversary of Deutsche Messe AG, which was founded in 1947 with the staging of Germany’s first-ever Export Fair. Seven decades later, Deutsche Messe has taken its place among the world’s top organizers of capital goods trade fairs, sporting a rich portfolio of events held in Germany and around the globe. With 2016 revenue of 302 million euros, the company ranks among the five biggest trade show companies in Germany. Its portfolio includes such world-class events as (in alphabetical order) CEBIT (business festival for innovation and digitization), CeMAT (intralogistics and supply chain management), didacta (education), DOMOTEX (carpets and other floor coverings), HANNOVER MESSE (industrial technology), INTERSCHUTZ (fire prevention, disaster relief, rescue, safety and security), LABVOLUTION (lab technology) and LIGNA (woodworking, wood processing, forestry). The company also regularly hosts a number of internationally renowned events by third parties, among which are AGRITECHNICA (agricultural machinery) and EuroTier (animal production), both of which are staged by the German Agricultural Society (DLG), EMO Hannover (machine tools; staged by the German Machine Tool Builders’ Association, VDW), EuroBLECH (sheet metal working; staged by MackBrooks) and IAA Commercial Vehicles (transport, logistics and mobility; staged by the German Association of the Automotive Industry, VDA). With more than1,200 employees and a network of 58 sales partners, Deutsche Messe is present in about 100 countries.