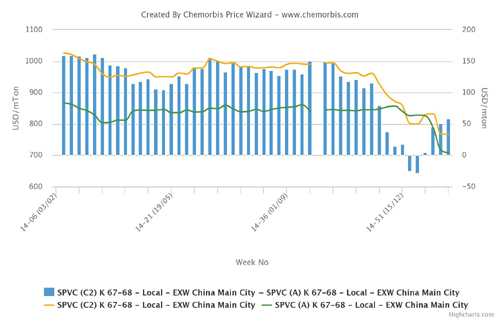 As reported on www.ChemOrbis.com, following steady declines over the past few months, the PVC sentiment has cautiously firmed up in Asia and the US in recent weeks with regional producers attempting price hikes albeit in small amounts. Nevertheless, the PVC market in Europe and Turkey remain on a weak note, players reported.

In the Asian PVC market, upcoming maintenance plans at major plants caused some availability concerns, which raised the question of whether the downturn would be suspended or not. On top of this, expectations about an improvement in India’s demand in the post-monsoon period supported the shifting sentiment on the sellers’ side. Some players, on the other hand, do not think that any increase will be justified by an improvement in India’s demand when China’s and Southeast Asia’s demand remains unchanged.

In the US, traders started to talk about a maintenance season for Q4 with a domestic producer already facing an unplanned shutdown at its VCM plant, which gave sellers an upper hand in their quest to stabilize and even strengthen the market sentiment towards their export offers. US sellers also claim to be receiving better demand from their export destinations upon lower freight rates. Players in Turkey and Egypt also affirmed slightly higher offers from the US, although they cannot be sure about their achievability.

On the other hand, demand in the Mediterranean markets as well as in West Europe is still considered rather stagnant. Price decreases are still in place for September spot business across Europe in the midst of concerns over ample supplies. Early October expectations are also hovering around a stable to soft sentiment, according to players.

Likewise, players in Turkey report rather weak demand in the PVC market with sellers complaining about being unable to conclude sales for their import cargoes. Local availability is reportedly comfortable. The downturn appears to have lost speed for now, although the sentiment is still tepid, according to ChemOrbis.