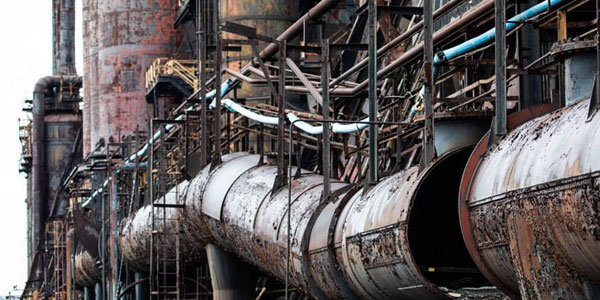 The petrochemical industry anticipates spending a total of over $200 billion on factories, pipelines, and other infrastructure in the U.S. that will rely on shale gas, the American Chemistry Council announced in September. Construction is already underway at many sites.

If those projects are completed, analysts predict the U.S. would flip from one of the world’s highest-cost producers of plastics and chemicals to one of the cheapest, using raw materials and energy from fracked gas wells in states like Texas, West Virginia and Pennsylvania.

Those petrochemical plans could have profound consequences for a planet already showing signs of dangerous warming and a cascade of other impacts from climate change.

The gathering wave of construction comes as the Trump administration works to deregulate American industry and roll back pollution controls, putting the U.S. at odds with the rest of the world’s efforts to slow climate change.

Trump announced in June 2017 that the U.S. had halted all implementation of the 2015 Paris agreement and intends to fully withdraw. America is now the world’s only state refusing participation in the global agreement to curb climate change (after Syria, the final holdout, signed in November 2017).

This petrochemical industry expansion–much of it funded by foreign investors–makes America’s refusal to participate in the Paris agreement all the more significant, because much of this new U.S. infrastructure would be built outside of the greenhouse gas agreement affecting the rest of the globe.

If American policy makers approve this wave of new plastics and petrochemical plants with little regard to curbing climate change and reducing fossil fuel use, environmentalists warn, they’ll be greenlighting hundreds of billions of dollars of investment into projects at risk of becoming stranded assets.

From Rust Belt to Plastics Belt

Some of the largest and most expensive petrochemical projects in the U.S. are planned in the Rust Belt states of Ohio, West Virginia, Pennsylvania and New York, a region that has suffered for decades from the collapse of the domestic steel industry but that has relatively little experience with the kind of petrochemical complexes that are now primarily found on the Gulf Coast.

In November 2017, the China Energy Investment Corp., signed a Memorandum of Understanding with West Virginia that would result in the construction of $83.7 billion in plastics and petrochemicals projects over the next 20 years in that state alone–a huge slice of the $202.4 billion U.S. total. Those plans have run into snags due to trade disputes between the U.S. and China and a corruption probe, though Chinese officials said in late August that investment was moving forward.

The petrochemical industry’s interest is spurred by the fact that the region’s Marcellus and Utica shales contain significant supplies of so-called “wet gas.” This wet gas often is treated as a footnote in discussions of fracking, which tend to focus on the methane gas, called “dry gas” by industry–and not the ethane, propane, butane and other hydrocarbons that also come from those same wells.

Those “wet” fossil fuels and chemical feedstocks are commonly referred to as “natural gas liquids,” or NGLs, because they are delivered to customers condensed into a liquid form–like the liquid butane trapped in a Bic lighter, which expands into a stream of flammable gas when you flick that lighter on.

Ethane can represent a surprising amount of the fossil fuel from a fracked shale well, particularly in the Marcellus. For every 6,000 cubic feet of methane (the energy equivalent of the industry’s standard 42 gallon barrel of oil), Marcellus wet gas wells can produce up to roughly 35 gallons of ethane, based on data reported by the American Oil and Gas Reporter in 2011.

And U.S. ethane production is projected to grow dramatically. By 2022, the region will produce roughly 800,000 barrels of ethane per day, up from 470,000 barrels a day in 2017, according to energy consultant RBN Energy.

That supply glut is driving down ethane prices in the Rust Belt.

“The lowest price ethane on the planet is here in this region,” Brian Anderson, director of the West Virginia University Energy Institute, told the NEP Northeast U.S. Petrochemical Construction conference in Pittsburgh in June.

Chemicals and the Climate

The petrochemical and plastics industries are notoriously polluting, not only when it comes to toxic air pollution and plastic waste, but also because of the industry’s significant greenhouse gas footprint–affecting not only the U.S., but the entire world.

“The chemical and petrochemical sector is by far the largest industrial energy user, accounting for roughly 10 percent of total worldwide final energy demand and 7 percent of global [greenhouse gas] emissions,” the International Energy Agency reported in 2013. Since then the numbers have crept up, with the IEA finding petrochemicals responsible for an additional percentage point of the world’s total energy consumption in 2017.

Carbon emissions from petrochemical and plastics manufacturing are expected to grow 20 percent by 2030 (in other words, in just over a decade), the IEA concluded in a report released Oct. 5. A few days later, the United Nations Intergovernmental Panel on Climate Change warned that by 2030, the world needs to have reduced its greenhouse gas pollution 45 percent from 2010 levels, in order to achieve the goal of limiting global warming to a less-catastrophic 1.5 degrees Celsius (2.7 degrees Fahrenheit).

The petrochemicals industry has so far drawn relatively little attention from oil and gas analysts and policy makers. “Petrochemicals are one of the key blind spots in the global energy debate, especially given the influence they will exert on future energy trends,” Dr. Fatih Birol, the IEA’s executive director, said in a statement this month.

“In fact,” he added, “our analysis shows they will have a greater influence on the future of oil demand than cars, trucks and aviation.”

The new investments, which will rely on decades of continued fracking in the U.S, offer the oil and gas industry a serious hedge against competition from renewable energy, even in the event that climate policies push fossil fuel energy to the margins.

“Unlike refining, and ultimately unlike oil, which will see a moment when the growth will stop, we actually don’t anticipate that with petrochemicals,” Andrew Brown, upstream director for Royal Dutch Shell, told the San Antonio Express News in March.

The planned infrastructure could also help bail out the heavily indebted shale drilling industry financially by consuming vast amounts of fossil fuels, both for power and as a raw material.

The American Chemistry Council has linked 333 chemical industry projects, all announced since 2010, to shale gas–that is, gas that is produced using fracking. Forty-one percent of those projects are still in the planning phase as of September, according to the council, and 68 percent of the projects are linked to foreign investment.

State regulators in Texas and Louisiana have already issued permits that would allow a group of 74 petrochemical and liquefied natural gas (LNG) projects along the Gulf Coast to add 134 million tons of greenhouse gases a year to the atmosphere, an Environmental Integrity Project analysis found in September. The group said that was equal to the pollution from running 29 new coal power plants around the clock.

The expansion of plastics manufacturing in America also has environmentalists worried over a plastics pollution crisis. “We could be locking in decades of expanded plastics production at precisely the time the world is realizing we should use far less of it,” Carroll Muffett, president of the U.S. Center for International Environmental Law, told The Guardian in December 2017.

The petrochemical industry transforms ethane and other raw material into a huge range of products, including not only plastic, but also vinyl, fertilizers, Styrofoam, beauty products, chemicals and pesticides.

The petrochemicals industry itself straddles an uncomfortable fence when it comes to renewable energy and climate change. A significant portion of its revenue comes from “clean” technology sectors, as it provides materials used to make batteries and electric cars.

One report last year concluded that roughly 20 percent of the industry’s revenue comes from products designed to reduce greenhouse gas emissions. In fact, the American Chemistry Council cited the industry’s role supplying “materials and technologies that improve energy efficiency and reduce emissions,” as it opposed Trump’s decision to drop out of the Paris agreement.

But petrochemical manufacturers are also heavily reliant on fossil fuels. They need them to power and supply a dreamed-of “manufacturing renaissance,” as the ExxonMobil-funded Competitive Enterprise Institute explained as it pushed for Trump to abandon the Paris agreement.

Plans to use American shale gas would also link petrochemicals to the expansion of fracking, which carries its own environmental concerns. The U.S. Environmental Protection Agency’s landmark study on fracking and drinking water concluded in 2016 that fracking has led to water contamination and poses continued risks to American water supplies.

In addition, though conversations about climate change usually focus on carbon emissions, the gas industry has such a bad methane leak problem that using natural gas can be even worse for the climate than burning coal.

One plant, Shell’s $6 billion ethane “cracker” plant currently under construction in Beaver County, Pennsylvania, has permits to pump 2.25 million tons of CO2 equivalent per year into the air near Pittsburgh, roughly equal to the annual carbon pollution from 430,000 cars.

Industry advocates say the region can produce enough ethane to support up to seven more ethane cracker plants like Shell’s.

“We’re trying to drop our emissions 50 percent by 2030,” Dixon said, referring to Pittsburgh’s highly touted plans to comply with international climate targets despite the federal government’s withdrawal from the Paris agreement. “The Shell cracker alone will decimate that.”