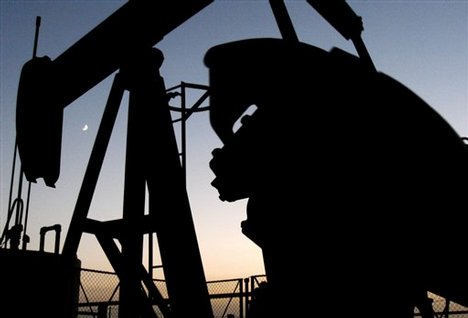 SINGAPORE – Oil prices hovered near $103 a barrel Thursday in Asia after a report showed mixed signs about U.S. crude demand.

Benchmark crude for February delivery fell 18 cents to $103.04 a barrel at midday Singapore time in electronic trading on the New York Mercantile Exchange. The contract rose 26 cents to settle at $103.22 in New York on Wednesday.

The American Petroleum Institute said late Wednesday that crude inventories fell 4.4 million barrels last week while analysts surveyed by Platts, the energy information arm of McGraw-Hill Cos., had predicted a decrease of 450,000 barrels.

Traders are also closely watching rising tensions between Iran and Western powers. Iran has threatened to close the key oil passageway Strait of Hormuz as possible retaliation to new U.S. and European economic sanctions. The U.S. has said it will not tolerate such a move.

Brent crude could temporarily jump to as high as $210 if the strait were closed, Capital Economics said.

“However, neither side would want tensions to spiral this far out of control,” Capital Economics said in a report. “Indeed, the threat of another ‘super-spike’ in oil prices when the global economy is still so fragile is itself a very powerful reason for the West to hold off from any military action.”

“By far the bigger risk is that oil prices will collapse due to an escalation of the financial crisis in the euro-zone.”

Capital Economics expects Brent to trade at $85 at the end of this year while Bank of America Merrill Lynch forecasts an average price of $108 in 2012.

AT&T is sweet on sugarcane-based thermoform

China, ASEAN implement another round of duty reductions for 2012