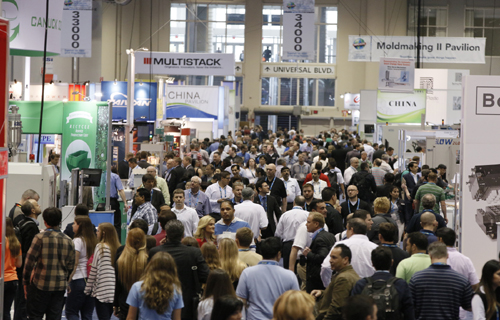 WASHINGTON, DC, U.S.A., April 8, 2015: The crowds of attendees and the clamor of working equipment that filled the giant exhibit halls at NPE2015 told the story better than numbers, but now there are statistics to make it official: NPE2015 was the largest show in NPE history.

In addition, registered attendance for NPE2015 was 65,810—19% greater than three years ago. These registrants came from 23,396 unique companies—22% more than the 19,198 companies at NPE2012—representing a substantial increase in buying potential.

Exhibitors came from 37 nations in all. In descending order of number of exhibitors, the ten largest participating countries are China, Taiwan, Canada, Italy, Germany, India, Turkey, France, Switzerland, and South Korea. These figures don’t include many companies that are based in other countries but exhibited through their US subsidiaries.

SPI president and CEO William R. (Bill) Carteaux acclaimed NPE2015 as the most successful NPE by many measures. “What made NPE2015 a milestone in the 69-year history of NPE was not only its size and international diversity, but also the richness of its offerings to attendees,” said Mr. Carteaux. “The hundreds of machines operating on the show floor, the customer service centers provided by material suppliers, the pavilions and programs on current issues and emerging technologies, the extensive agenda of co-located conferences—this wealth of content surpassed our previous shows and now provides a guideline for making future NPEs even more attractive to participants. The plastics industry should be truly proud of its show”

K 2013 online ticket shop to start in end of March