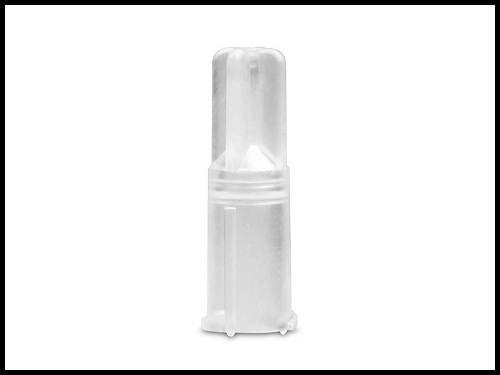 Husky Injection Molding Systems (Bolton, ON), which has been fine-tuning its go-to-market approach, says that the medical business will play an increasingly important role.

“It’s right up our alley,” says Jeff MacDonald, VP of marketing. “It’s very sophisticated and high volume.” One of Husky’s goals is to develop total systems that boost productivity and help to eliminate variation from the injection molding process. That has been a winning formula in the beverage container business, where Husky has been a major producer of preform molds, machinery, controls and hot runner systems.

The system is producing a 0.35g IV breather cap made from low-density polyethylene. MacDonald told reporters at an opening day press conference that the cap is produced within an operating window of +/‐0.002g of variability. “It’s really the hot runner plus the controller plus the machine that allow us to reduce the variability,” he says. Some molders are missing opportunities to eliminate waste in the production of high-volume medical disposables by focusing too much on the machine.

An interesting new Husky technology for the medical market is the Ultra SideGate hot runner, which. targets deep draw parts such as pipettes, syringe barrels and other smaller parts where quality and gate vestige are critical. Materials used so far include polycarbonate, cyclic olefin copolymer and polypropylene.

MacDonald says that Husky is using partners to develop molds for its medical customers. Three he mentioned are Prestige, NyproMold and Tech Mold, which worked on an Ultra Side Gate syringe mold with Husky.

In a separate development announced at the press conference, MacDonald says Husky will be showing a prototype of a new HyCAP high-output beverage closure manufacturing machine at Chinaplas. A HyCAP 300 system at NPE 2012 is producing a 0.95g water closure at a 2.2-second cycle using a 96-cavity KTW beverage closure mold. Productivity of the machine is 45% higher than the machine shown at NPE2009. Integrated systems are also an important Husky strategy in the beverage closure market. MacDonald says the machine at Chinaplas (Shanghai, China, April 18-24) will be the world’s fastest closure system. MacDonald says that Husky will be expanding its capabilities in the Shanghai area as well as in India. Details are still being determined.

Global Automotive Plastics Market for Passenger Cars worth $42,135 Million by 2016