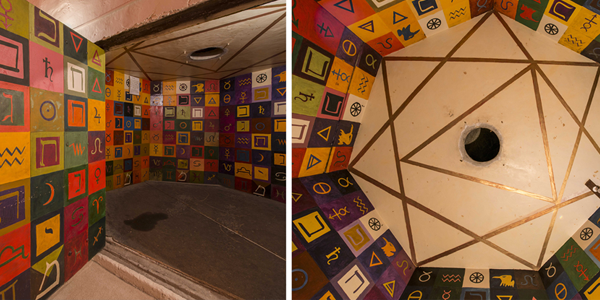 It took three weeks of creative collaboration with school groups, members of the public, museum staff, and many of George’s friends and whānau to bring his vision to life, and we thank all those who contributed.

As the show’s title suggests, George’s vision focuses on the convergence of plastic and oceans.

Plastic is commonly regarded as a useful (perhaps necessary) evil that, while endlessly versatile, is also undesirable and almost worthless: often seen as an inferior imitation of a more “real” material.

In contrast, George sees plastic as a taonga, a beautiful and precious substance just like pounamu or diamond, with unique properties and an incredible genealogy.

Millions of years of intense heat and pressure transformed the remains of ancient marine life into crude oil, which is extracted from the body of Papatūānuku, Mother Earth, and used in chemical processes to form the vast array of plastic forms in existence today.

They are therefore simultaneously the oldest and the newest objects in our lives, and they’re all entirely real.

Plastic itself is not evil at all: rather it is a systemic social failure to suitably value this extraordinary substance that sees it produced in obscene over-abundance then discarded after minimal use, resulting in dangerous degradation of the ecosystems we all rely on.

I sum up George’s approach to this dilemma as “don’t’ hate the plastic, hate the game” — which reminds me of a work in the EAST exhibition currently on show at Hastings City Art Gallery.

The Strong Silent Type by Kauri Hawkins features a chess board populated with coins, bottles of coke, packets of cigarettes and more: “goods” which, as Kauri explains, labouring workers often buy from dairies to get through the day.

Kauri makes the point through this artwork that we’re all playing a big game, with pre-determined rules and pieces to play with.

Viewers are prompted to ask themselves, do we like this game? Is it the best one for us all? Where does it come from, who developed it, and how does it end?

Bottled Ocean presents one possible outcome: an imagined world of 100 years into the future, in which the ice caps have melted and the surface of the globe is covered in ocean.

The life forms that have survived have adapted to the proliferation of plastic, and are now both strange and enchantingly beautiful. Microplastics have become children of Tangaroa, while Pānia is seen surrounded by her whānau, contemplating the changes wrought to her undersea world.

Before meeting George, I thought my perspective on plastic was set in place: it’s bad and we need to get rid of it. But his approach, embodied in his art, is compelling and has certainly made me think again — with both more nuance and rigour than before.

He will give a talk in the exhibition space this morning, so come along if you’d like to hear his insights for yourself while experiencing the carved plastic phenomenon that is Bottled Ocean 2118.