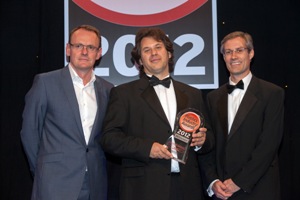 The fast-turnaround tooling project was a critical to the scheduled launch of Randox new Evidence Evolution product, claimed to be the world’s first fully automated, random access biochip testing platform, which is anticipated to revolutionise current diagnostic testing.

The debut of this new technology naturally called for the development of a visually stunning instrument casing, incorporating a range of colours and finishes. This was quite a challenge as the largest moulding stands at 1668mm x 1191mm x 403mm, and all parts were specified to be cast in fully certified UL94 V0 flame retardant material to allow for full internal shipping and the obtaining of necessary approvals.

Altogether, the equipment casing incorporated a total of 26 RIM components, as well as numerous smaller injection moulded parts – and naturally the budget needed to be carefully managed on such a large scale project. During its 20 years of specialisation in the creation of RIM tooling, Midas has developed its own trademarked tooling processes, MRIMTM, which enables the company to produce highly complex mouldings with little or no compromise on detail, in relatively low volumes, and in a wide range of top class finishes. This, together with Midas’ guarantee of 5000-off shots per tool, provided the perfect production solution the new Randox product, with its wide variation in moulding sizes.

As an integral part of the tooling development team for the project, Midas ensured that all parts considered for RIM were appropriately designed for the process – without impacting the client’s requirements. This expertise in ensuring optimum manufacturability ensured that time spent at the early design phases eliminated issues which could have occurred later in tool manufacture. In the event no modifications were required to any of the 26 parts produced – clear evidence of really effective Design for Manufacture processes.

A combination of face-to-face meetings, conference calls and email dialogues supported the necessary project management, which was necessary due to the significant geographic distance between the different locations. Embracing modern communication techniques reduced internal costs to both parties and also streamlined the development phase when time to manufacture was so critical. All the tooling was produced on time during the phased released programme, allowing the client to check and release parts in stages which matched the build phase and also helped spread the tooling start times. Good project management was essential due to the number of parts involved and ensured that any mid-process changes that occurred were well managed and integrated and that correct issue levels and part details were being produced.

The partnership approach taken by Midas and Randox was critical in producing this complex set of mouldings in such an extremely short time-scale – with the additional benefit that, using Midas MRIM process, all the tooling will be very easy to modify thus allowing for changes and future-proofing the design to satisfy inevitable market changes.