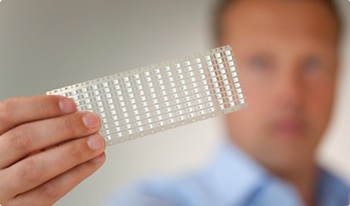 Its high flow properties reportedly make it suitable for use in high cavity tools. This enhanced reflectivity of Stanyl ForTii reportedly has an immediate effect on the LED package light output and enables LED suppliers to improve their key specifications. Stanyl ForTii LED LX reportedly outperforms competitive polyphthalamide PPA resins thanks to its specific polymer structure. “High reliability and LED lifetime are further enabled through its excellent adhesion to silicones and epoxy encapsulates as well as the metallic lead frame, avoiding chip degradation due to moisture or air diffusion through interfacial delamination phenomena,” adds DSM.

Over the past years, sales of LED packages have increased by over 50% per year according to DSM and performance also improved in double digit percentages. This tremendous growth was driven mainly by the switch to LEDs for LCD (liquid crystal display) backlighting and by developments in the lighting industry. LED manufacturers are reportedly looking for materials that deliver high reliability, enabling smooth high volume production and excellent light output. DSM has responded to this need with the introduction of Stanyl ForTii LED LX. Approximately 20% of the world’s electricity consumption is used for lighting applications.

This provides a significant opportunity to cut both emissions and electricity costs. Today’s LEDsconsume about 70-80% less energy than conventional lamps. At the same time, they increase service life and design flexibility. Since LED solutions are rapidly becoming more affordable, LED lighting is being adopted increasingly in many applications around the world, including automotive. Over the past few years engineering plastics have become the incumbent solution for LED.