The Iranian market is huge with high potential in the eyes of many foreigners participating in the 10th International Exhibition of Plastic, Rubber, Machinery and Equipment of Iran, dubbed Iran Plast 2016, which is running from April 13 to 17 at the Tehran Permanent International Fairgrounds.

“For us, Iranian market is very important. It is a very huge market. We see in this market a lot of possibilities. Now that the sanctions are out, for sure, the business will be easier,” Corrado Moneta, the technical sales manager of Italian ICMA San Giorgio Company, a seller of extrusion lines for plastic industry, told the Tehran Times. 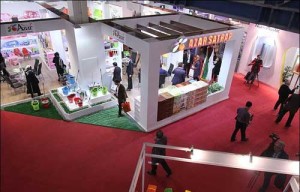 In the past, it was not easy with the banks; also opening letters of credit was not always possible for a company, he added.

“We have been working in Iran since 2008. We have been here even last year that was the most difficult year for your economy. We attended in each edition of Iran Plast, while other European countries did not. Now that everything is changing, I hope that we will do more successful business in your country that for us is very important,” the Italian director noted.

When sanctions were active, Italians were always trying to make business here; so Italy is always interested in business with Iran, he said, adding, “Removal of sanctions will help Italy to have a stronger relationship with your country for sure.”

He also said, “I have participated in five editions of Iran Plast. This edition seems for sure better than the other ones with more expositors.”

Rainer Klass, the area sales manager in IMD vista, a high-tech Swiss company, specializing in the camera-base inspection and checking systems for beverage industries, believes that the European suppliers are prepared to start and develop business relations with the Iranian customers in the post-sanctions time.

“And what we can see as the reply from the Iranian customers they are open to close cooperation and close business relations with the European suppliers,” the Swiss director stated, adding, “We hope that the limitations due to the remaining sanctions will disappear completely and immediately. It will help a lot to this.”

“In the past you had a very close relation with the Chinese I think. But now the customers are looking for alternatives in higher quality which I think is a very big demand in Iranian market,” he commented.

Asked if his company intends to make any investment in Iran, he replied, “We can see that the market [for our products] is still low here; there is not really high demand, but the market is developing here for sure; so it’s the positive outlook.”

The market has to develop in one year; maybe in two years the market is able to make investment in modern technology, step by step of course, he added.

Although he admitted that they are prepared to supply their technology to their Iranian customers for sure.

About his concept of Iran Plast, the Swiss participant said, “We can give you a very good feedback; we have received very positive response from potential customers here.”

‘Iran, a center for re-export of products’

Hardik Gudhka, a director in India’s Axelon Group, a manufacture of brass plumbing and components, believes that Iran is a tremendously big market, because it is a center, from which it is possible for re-exporting to countries like Kazakhstan, Turkmenistan, Iraq and Afghanistan.

So, Iran itself is a very big market, and now that the sanctions are being removed the whole world is focusing on Iran, because the Iranian economy will now grow soon, he commented.

“It is my first visit to Iran. I came here because the Indian government supports exports to Iran. I am really surprised by the market. It is a very big market and I think I will be coming very soon again after three or four months”, the Indian director stated.

Plastic industry will be growing really strongly in Iran after the sanctions, said Guido Krechel, the area sales manager for the Middle East and Iran in Germany’s Kautex Maschinenbau, a manufacturer of extrusion blow molding machines.

Although he complained that the sanctions are not gone really, with banks, business is still difficult.

“I feel the people are a little bit excited, a little bit nervous to do the right thing now [that sanctions are being lifted],” the German director commented, saying that to invest in a right moment everybody wants to be the first runner

Everybody really likes to invest and do business; you see that something is growing now here, he also highlighted.

“I can really see the improvement between this edition and the last edition of Iran Plast. It’s getting better and more professional. We really like it here”, the European exhibitor mentioned.