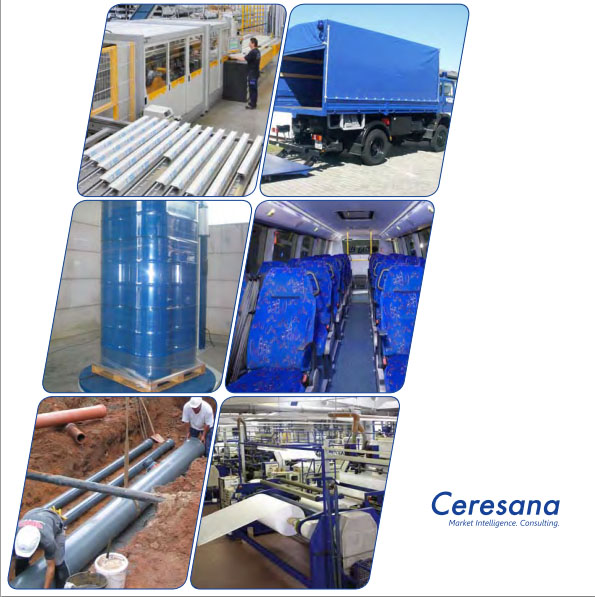 Plastics last forever – but only when protected against effects of heat and light. Therefore, stabilizers are indispensable for many products made from plastics and rubber: They ensure safe processing and prevent premature aging and weathering. Especially polyvinyl chloride (PVC) has to be treated with stabilizers. The market research institute Ceresana has just published a new study regarding the market for these essential additives.

“The global market for stabilizers is undergoing highly dynamic changes at the moment”, explains Oliver Kutsch, CEO of Ceresana: “Market shares of individual product groups are shifting considerably. Stabilizers based on lead are increasingly replaced by products based on calcium or tin compounds. As a result, many companies have to strategically reposition themselves.” Several multinational chemical enterprises have been divesting their stabilizer businesses to smaller producers of specialty chemicals in recent years. The market research institute Ceresana forecasts the value of the global market for stabilizers to increase to approx. US$5.3 billion in 2021.

Environmentally Friendly Stabilizers in High Demand
The most important product groups on the market for stabilizers are compounds based on calcium (calcium-zinc and organo-calcium), lead, and zinc stabilizers as well as liquid and light stabilizers (HALS, benzophenone, benzotriazole). After cadmium based products disappeared almost completely from the markets until the middle of the past decade due to health and environmental concerns, recent years have seen an increasing substitution of lead-based products. In both Western Europe and, to an increasing extent, in Eastern Europe, demand for lead stabilizers is falling rapidly. Shortly, lead-based stabilizers will vanish completely from the market in the European Union. An increasing demand for environmentally friendly products can be observed in China as well. Ceresana expects global consumption of calcium-based stabilizers to increase by 6.9% per year.

Considerable Regional Differences
Reporting a market share of 55%, Asia-Pacific is the worldwide largest sales market for stabilizers, followed by Western Europe. A large share of demand originates in China, the worldwide largest producer and importer of primary plastics. In Europe, profiles are the main application for stabilizers. Calcium-tin and organo-calcium stabilizers are dominating in Western Europe especially. Other products such as tin compounds and liquid mixed metals are mainly used for films. Even though tin stabilizers are comparatively expensive, a small amount suffices to ensure stabilization of the final products. In terms of quantity, North America is only the third largest market for stabilizers. Manufacturers of pipes and profiles mainly consume tin based stabilizers. Sometimes, calcium-based stabilizers are used as an alternative, though they are usually added to PVC cables. The market share of lead stabilizers in North America has been traditionally low.

Construction As Important Indicator
The prime sales market for stabilizers is the plastics industry. Sales volumes of profiles, pipes, cables, films, and floorings is highly dependent on the development of the construction sector – as a result, the development of this industrial sector is of paramount importance to demand for stabilizers. Neither in Europe nor in the USA the construction industry has been able to reach sales volumes reported in times preceding the economic crisis of 2008/09. During the past years, demand for plastic products and thus stabilizers rose in the BRIC countries (Brazil, Russia, India, China) in particular. Market shares of individual applications such as Profiles or Pipes, however, vary widely depending on country and region. Also, different stabilizers are used for the same applications in different regions of the world.

The Study in Brief:
Chapter 1 provides a presentation and analysis of the global market for stabilizers – including forecasts up to 2021: Demand for and revenues generated with stabilizers are provided for the world and each region.

Chapter 2 examines demand for and revenues generated with stabilizers as well as demand in the applications Pipes, Profiles, Films, Cables, Floorings, and other plastic products and elastomers in 16 countries in more detail. Besides, 144 important manufacturers of stabilizers, including their respective portfolios, are listed in a clear representation.

Chapter 4 analyses demand for individual products such as tin-, lead-, and calcium- based stabilizers as well as liquid mixed metals and other products. Demand is clearly arranged for each of the 16 countries analyzed in chapter 2 and all world regions.

Benchmark of a Generation:QFM – the "Queen of all Foaming Machines"

Author plasticsinfomart 85
LinPac Packaging has spent another £3 million at its Featherstone plant in West Yorkshire on equipment for its Rfresh range of recycled PET food...
Read More