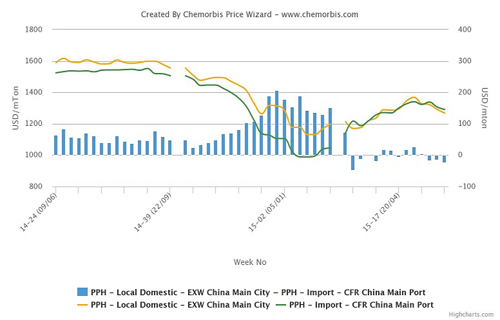 Players in China report that domestic PP prices continued to soften this week, causing domestic PP to trade at a discount to import cargoes, according to data from ChemOrbis Price Index. Attractively-priced local PP is said to be exerting downward pressure on import prices as sellers offering overseas cargoes are facing pressure to give ground on their prices in order to maintain competitiveness with domestic cargoes.

According to data from ChemOrbis Price Index, domestic homo-PP prices on an ex-warehouse China basis have been trading at a discount relative to import prices on a CFR China basis for the past three weeks, with the discount for domestic cargoes having risen to around $25/ton in the current week, the steepest discount for the domestic PP since early March. Local PP prices have been losing ground relative to the import market since the end of the Chinese New Year holidays, which took place in the second half of February. Prior to the holidays, the domestic market had been carrying a premium of more than $150/ton over imports.

“Buyers are able to meet their needs from the domestic market, which is resulting in relatively fewer offers for both import and locally-held imported materials, which are struggling to compete with domestic cargoes these days,” a distributor based in Zheijiang commented. A distributor based in Ningbo added, “Several plants that had previously been shut down have resumed production and this has lead to more comfortable supply levels. In addition, June and July are traditionally slow seasons for some PP applications and this has negatively impacted demand.”

A trader who reported receiving offers for Indian and Middle Eastern PP with $10-30/ton decreases on the week stated, “Domestic prices, especially for coal based cargoes, are quite competitive relative to import prices and this has put pressure on overseas sellers to step back on their prices. Most buyers are keeping to the sidelines these days as it is a slow season for several PP applications.”