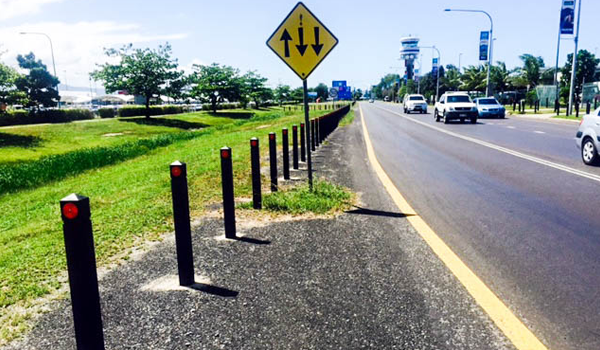 One council in England is attempting to tackle the problem of recycling hard plastics by repurposing the materials for its streets, in the form of kerbstones. Lancashire County Council has been testing a prototype for a plastic kerbstone at a busy junction in Preston, which drivers and pedestrians have been passing without noticing. A spokesperson for the council said the kerbstone is “wearing well,” adding: “You wouldn’t think it was plastic if you didn’t know.”

Governments around the world have been pondering what to do with hard plastic waste since China suddenly stopped importing millions of tonnes of it last year. Kerbstones are just one of the solutions being looked at. And, if the Preston experiment proves successful, the UK’s road network could eventually end up lined in plastic. Lancashire has been secretly testing plastic kerbs for some time now and the current ones, which have been fitted near the junction of Ribbleton Lane and Blackpool Road, are the third prototype.

Sturdy enough for the job

“The others we tried were not strong enough,” said the LCC spokesman. “We need to keep it in place for another year or so to make sure it is sturdy enough for the job.” The council says that, while there is a big market for the type of plastic which is used to make drinks bottles, hard plastics like the material used to make garden and office furniture is far more difficult to recycle. Up to this year China has been processing 7.3m tonnes of used plastic — half of the world’s waste — with Britain shipping around two-thirds of its used plastic there — around half a million tonnes — each year.

But, from January 1, the Chinese stopped accepting the waste, declaring they no longer wanted to be seen as the “world’s garbage dump”. With plastic building up in the UK — and inevitably finding its way into landfill — the news that kerbstones could be one answer is being welcomed by local authorities. Lancashire handles up to 10,000 tonnes of low value plastic. The spokesman explained: “It is often problematic to find companies prepared to take this material, with the result that much of this currently goes to landfill.

“We’re in the very early stages of trialling the kerbstones, which if successful could also potentially be used to make other types of street furniture. “We have worked with a company to make a number of prototypes, and are currently trialling this plastic kerb on a street in Ribbleton to see how it performs in real world conditions. “The plastic used to make this kerb is mixed with fibre and ash, with any reject fraction able to be pelletised for fuel.

“We are currently working towards scaling up the existing trial. The potential for the future is that more hard plastic could be diverted from landfill in this way, and that old street furniture which is no longer fit for use could be re-melted to make new products, reducing the generation of new waste.” Plastics going to landfill Lancashire’s household recycling centres have removed their plastics skips over the past few weeks because of the China effect. So large quantities of the lower grade hard plastics like garden furniture, plant pots, washing up bowls, plastic coat hangers, dust pans, watering cans, buckets, garden furniture and plastic toys have all had to be dumped in bins for non-recyclable material — and thus into landfill.

This week the authority revealed it has found a processing company which will take some of that plastic, as long as it is first sorted through by staff at the centres. Steve Scott, LCC head of waste management, said: “I’d like to reassure people that the plastic which they separate as part of their doorstep waste collections is being recycled, and we also have facilities at our recycling sites for collecting and recycling good quality plastic such as plastic bottles. “However we have temporarily removed the containers for separating hard plastics at our recycling centres as changes in the global market for recovered plastics mean we haven’t been able to recycle it recently.

“We have been working with processors over the past few weeks to establish whether they would be interested in taking some hard plastics and have been conducting a trial at two of our recycling centres (Preston and Lytham). We have now found a processor willing to take some of this material and we’ll be starting to recycle hard plastics again in the coming weeks. “We’ll be putting signs up at the sites when this is introduced to let people know what to do with items which contain hard plastics.”