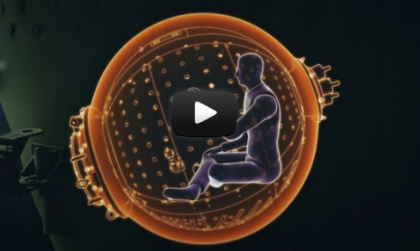 Earlier this year, Cameron completed a record-breaking solo dive in the sub to the Mariana Trench, nearly seven miles down, the deepest place on the planet. He spent more than three hours collecting samples and recording video. (Watch a video interview with Cameron after returning to the surface here.)

The Deepsea Challenger was built by Acheron Project Pty and designed by Design + Industry in Sydney. The novel, vertically-oriented shape of the 24-foot-long submersible lets it get to the bottom faster. Several different novel materials were used in the sub’s construction. The 2.5-inch-thick steel pilot sphere inside the sub that surrounded Cameron included a lining of carbon fiber composite material. The material’s prepregs were made by UK-based Umeco Structural materials, also known as Advanced Composites Group.

The pilot sphere measures 43 inches in diameter, and contains electronics and life-support equipment, as well as the pilot. It’s so small that the pilot must sit with legs tightly bent, and arm movement is very limited. The sphere’s carbon fiber internal lining was manufactured by Australian composites parts manufacturer LSM Advanced Composites Pty. (Watch a video showing the pilot sphere below.)

A new material, a syntactic foam called Isofloat, was developed specifically to help the submersible withstand the pressure at the bottom of the ocean, remain buoyant, and return to the surface in the shortest possible time. Made of hundreds of tiny, hollow glass microspheres suspended in polyester resin, this material was used to construct the sub’s giant beam. This beam is the largest component and the main structural frame, which is attached to the pilot sphere by polyester straps. The foam takes up about 70 percent of the sub’s volume.

A total of 13 research and test dives were made by Cameron and other pilots during the project, which is called the Deepsea Challenge expedition. This expedition is part of a joint scientific project to explore the ocean floor, collect samples, and conduct experiments, among Cameron, the National Geographic Society, and Rolex.